For a long time, protests have been a powerful tool for enacting change and allowing people to express discontent. This outlet has served for marginalized groups to show their frustrations and make their demands heard to the public. Nowadays, with the introduction of social media and the rise of technology, protests have changed prominently but remain a strong mean for individuals to fight for what they believe, letting the rest of the world see it.

Several protests, particularly this past month, have emerged around the world. From Hong Kong’s protest that peaked mid-summer with millions of people in the streets demanding democracy and respect towards their China-independent jurisdiction, to Chile’s major riots this week due to the rise on taxes and prices on public services, resulting in violence and curfews. With mostly violent results and human casualties in the middle, I want to explore some of the protests happening right now in the world.

The whole situation peaked when Hong Kong ‘s government introduced the Fugitive Offenders (Amendment) Bill, which, if enacted, would allow local authorities to extradite criminal fugitives to places without extradition agreement, such as Taiwan and Mainland China, and vice versa. As we know, Hong Kong belongs to China, but they have their own currency, political system and cultural identity. Protected by their Basic Law, Hong Kong remains independent from China’s jurisdiction, meaning that it guarantees its freedom of protest, free press and expression. Thus, it makes sense how this new Bill poses a threat to hongkoneses as it would take their autonomy and liberties away.

Going into its 20th weekend of anti-government protest, millions of people are still going into the streets demanding bigger democratic reforms. Now, they also ask for investigations into police misconduct and accountability, due to the eventualities happening on the previous week’s protests. Multiple rounds of gas and water cannons have been deployed from the armed forces in order to restore order and keep control of violence around the city causing clashes between authorities and civilians. But with several cases of vandalism, targeting Chinese brand stores and companies specifically, and even on public transport stations, this matter does not seem to reach an ease yet.

Violence is at burst in the city, with ramped up arrests and thousands of people getting injured every time they go out to protest. With this much uncertainty, some protesters have even made the decision to write their final goodbye, typically a letter to their families and record for them to see in case something were to happen. It is a heavy feeling and very tense moment for Hong Kong, but the protesters message is clear: People should not be afraid of their government.

Thousands of people have come out to the streets in Lebanon to demand an end to the economic crisis and government corruption the country finds itself in. The Middle East country rules by a framework of a Confessional system. Meaning that the highest offices are proportionately reserved for representatives of certain religious communities. For example, the President must be Maronite Christian while the Prime Minister, Sunni Muslim. This system was meant to balance power, but political parties over time have allegedly used religion to identify and divide the population.

Over the years, Lebanon has seen its unemployment rate and public debt grow and become unstable, resulting in an economic crisis with debt rising up to 150% of gross domestic product (GDP). Plus, Lebanese population accuse their government of being inefficient and corrupt as they are neither resolving the issue, nor taking care of their population. They have seen electrical and water supplies disrupted frequently and even piles of rubbish on the streets. In addition, people have been suffering from shortages on consumption goods, medicine and electricity. And to worsen the situation, last week Lebanon government mismanaged a mountain wildfire that spread quickly to residential areas, proving again to the population how inefficient their action was. The government approved a package of new austerity measures, in order to tackle their deficit, through the implementation of taxes including cigarettes, petrol and the highly publicized Whatsapp tax (a monthly USD$6 fee). Then, people reacted.

For days, the city of Beirut saw its streets full of people chanting and marching as one, looking for a revolution of their political system and the fall of the current regime. This unified demonstration from the population was shown over several cities in the country, and it has been overwhelmingly peaceful. Some religious leaders were spotted protesting hand-in-hand representing union, people were chanting the national anthem and even other patriotic songs, there is even a protest rave taking place in the city of Tripoli. Of course there were a few violent outbursts, that involved vandalism, in addition to clashes with the police. But whether it is to avoid bigger violent outbursts or it is linked to their culture, Lebanese are showing a positive attitude and are looking forward to real change.

In response, on October 21st, the Lebanese government approved a new reform package, that includes cutting politician’s salaries, scrapping out the Whatsapp tax and giving financial aid to poor families. This represents a positive outcome of the protests, but the population still demands a bigger change, not only politically, but a reform that aims to reduce the high inequality and economic crisis that they live by. 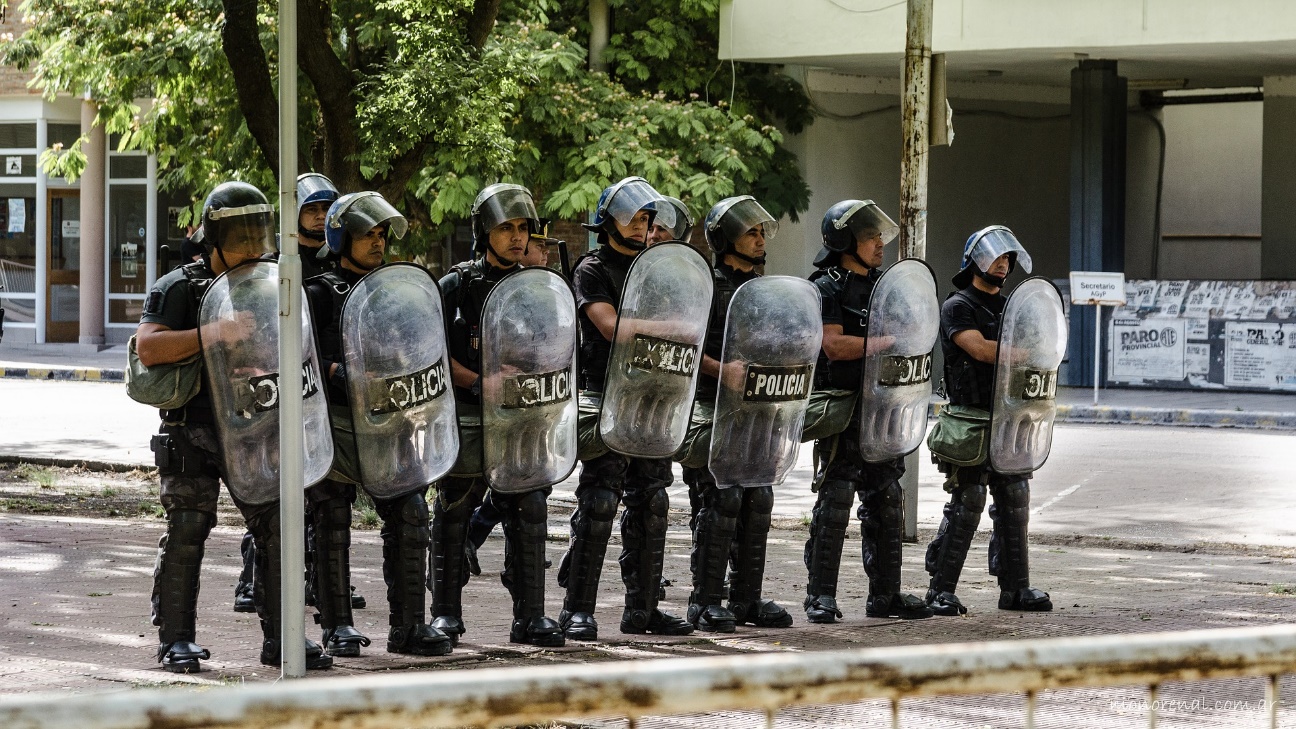 The government of current President Lenin Moreno reached an agreement with the International Moneraty Fund (IMF) in order to receive USD 4.2 billion in credit support via a three-year Extended Fund Facility agreement, in exchange of reducing their fiscal deficit. In response the government came up with a plan full of austerity policies that would affect both the private and public sectors. This plan includes a special contribution from private companies with earnings above USD 10 million each year, and a budget tightening in the public sector with a reduction of 20% on wage for part-time labor contracts, a decrease from 30 to 15 days for holidays and a contribution from public sector employees of a one-day salary to government funds. However, the idea that triggered the mass protests by causing the most outrage was the elimination of fuel subsidy, which has been valid for more than 4 decades.

Immediately after the plan was announced, the price of fuel increased. The gallon of extra gasoline, the most used fuel in the country, went from USD 1.85 to USD 2.30 and for the gallon of diesel, from USD 1.08 to USD 2.27. Representing an increment of 120%, causing a chain reaction in the prices of transportation and consumption goods. As it is expected, transport sector workers protested against, and demand a stop to this reform. Protesters are being backed up by unions, students and the politically-strong Movimiento Indígena (Indigenous movement that represent the minorities around Ecuador). Unfortunately, protests around the country have activated violent outbursts, with department stores being looted and vandalized, to which the government replied by implementing a 60-day state of emergency, and sending the armed forces to the streets, increasing chaos. By the 14th of October, after 12 days of protests, the country went back to normal, leaving scenes of repression and violence behind for the world to see.

The IMF is still supporting President Moreno’s reforms, and he has declared that he would not give up on these, but is holding up for now until all the parts involved reach an agreement. Nonetheless, the political situation is more tense. Ecuador’s ex-president Rafael Correa has been encouraging the protests via his social media accounts, but away from Ecuador, clearly supporting the opposition (Moreno was Correa’s vice president). After this, President Moreno is accusing Correa of working with Nicolás Maduro, president of Venezuela (main player in the humanitarian crisis in his own nation), and scheming with violent groups in order to unbalance and attack his government. Of course, the Correa-Maduro relationship has its own history, but that’s another story. For now, it is just a big political mess that is causing the population to lose trust in this government by delegitimizing its institutions, which is mostly harmful for all parties involved.

The crisis comes after an approved package of economic reforms was announced to the public just last week. Chile is a rich country; it is not sunken in debt and over the years they have succeeded to reduce their poverty levels. However, inequality is strong. A report from CEPAL (Comisión Económica para América Latina y el Caribe) for 2017, showed that the 1% richer side of the population took more than 26% of the national wealth, while the 50% of households with lower incomes only had access to 2% of it. And this situation is worsening when we see that Chile is an expensive place to live, especially for a minimum wage worker who earns around 300,000 chilean pesos monthly (USD 560 or CHF 550).

So, when President Sebastian Piñera decided to increase the price of the metro from 800 chilean pesos to 830, people were strongly disagreeing. This increase would mean that people from middle and poor sectors would use from 16% to 30% of their minimum wage on transportation fees. The protests in Santiago, capital of Chile, began on October 7th, with students evading massively the ticket purchasing on the metro, literally jumping through the fences to access it. But, the situation escalated quickly over this last weekend as violence flooded the streets of the city, with metro stations being vandalized and burnt down, supermarkets being looted, and attacks on government buildings. This lead President Piñera to implement a state of emergency and curfew, that remains until today. With the military on the streets repressing the protesters, they felt attacked and violence increased. Other cities, like Valparaiso and Concepción, also saw violent clashes between people and the armed forces. In the way infrastructure was attacked, the main airport in Santiago had to shut down, leaving thousands of people stuck overnight, and school lessons were stopped in these cities until further notice.

This unusual violent result does not seem to go away, and President Piñera has accused the opposition of putting lives at risk just to cause maximum damage to his regime. However, this party accused the Piñera administration of reacting inefficiently to the protesters and that the reform to rise the price of the metro lacks empathy to a much bigger portion of the population. With 11 people confirmed dead as casualties, it is certain that these are the most violent days Chile has seen in the last decades.

As outside viewers, we can only hope that governments and regimes find a way to protect their population and find a solution that will convene all sides, leaving aside political interests and reputations. But these are not the only protests happening right now. As I write this article, an outburst is rising in Bolivia after the results of the last national elections have been announced, marking a 4th term for incumbent president Evo Morales. And protests in Barcelona carry on, after citizenship rejected their Supreme Court decision of incarcerating pro-Catalunya independence activists and politicians. In places such as Haiti, Indonesia, Russia and many more over the globe, an uprising number of people are taking action to fight for themselves. Of course, I am neither an expert on protests, nor on political issues, in any of the countries I have written about, but the goal here is to inform and raise awareness within our community of the beyond-our-borders juncture.