The expression “Fake News” is defined as a “false, sensational information disseminated under the guise of news reporting”[1]. It has, however, been thrown around by President Trump for any negative press coverage of himself and the Collins Dictionary even went as far as naming it the 2017 word of the year[2]. Thomas Jefferson held, already back in 1807: “Nothing can now be believed which is seen in a newspaper. Truth itself becomes suspicious by being put into that polluted vehicle”[3]. This goes to show that even over two hundred years ago the reliability of information shared by the press was questioned. But at the age of internet and free speech, where anyone can start a blog, post on twitter and spread information, how do you know what is real and what is not? The rising phenomenon of fake news is not just Trump’s favorite expression, it is slowly becoming a real concern.

Why are fake news an issue?

Due to the importance of the news in politics and society, misinforming the public has an extremely disruptive effect on events such as elections or referendums. However, the issue with spreading fake news is much greater than simply having people believe false information: it has also consistently driven propaganda, “hate speech” and occasionally violence[4].

During the 2016 US elections, a conspiracy theory went viral and led to an alarming episode in a pizzeria in Washington DC. In fall 2016, Hillary Clinton’s campaign manager’s personal e-mail account was hacked, and some e-mails were published by WikiLeaks. Supporters of the “Pizzagate” conspiracy theory falsely claimed that those e-mails contained hidden messages about human trafficking, connecting several restaurants and senior officials of the Democratic Party to a pedophile sex ring. Mr. Welch, after finding out about the online rumors, decided to take matters into his own hands and fired a rifle in a pizza restaurant, which he had heard was allegedly the center of the sex ring. This is an infamous example of fake news being at the center of a shooting incident[5]. Due to the negativity surrounding fake news, many international organizations, law and policy makers and media actors have decided to give it a great deal of attention.

The freedom of the press was created in order to serve democracy by exposing the government’s activities to the scrutiny of the people. It was meant to be unbiased and honest and journalists were considered to be the guard dogs of democracy. Freedom of the press not only entails the right to share information with the public, but it also allows the public to receive that information. Nevertheless, this freedom only protects precise and reliable information shared in good faith and in accordance with journalistic code of ethics. Thus, the media protected by the freedom of press includes among other things newspapers, magazines, books, television and radio shows that fulfill a certain number of standards like accountability, accuracy, attribution to a source, balance of the different sides of a story and independence from business pressures. Therefore, media that does not satisfy these conditions will not be protected by the freedom of the press but by the freedom of speech. Free speech media has the right to express views on any subject without much restriction. This includes not only cable TV, talk shows and blogs but also people who comment on online media.[6]

Although this distinction may appear trivial, it is in fact quite important. The blurring of the line in the public mind must be corrected due to the implications surrounding the difference, especially in the digital media age. Distinguishing between free press and free speech allows the readers to ponder the weight of the information and hopefully avoid spreading fake news.

The role of technology in fake news

The media has been forever changed by technological developments, the internet and its availability to the masses. The monopoly is not held by the traditional press anymore and anyone who has access to internet can now share and consume information, which is simultaneously an asset and a threat. These developments have therefore thrown into question the reliability of information in the digital age.

Mike DeVito, a graduate researcher at northwestern university, believes that fake news are not a technical issue, they are a human issue that technology helped scale. Therefore, according to him, we need to find a human solution, not a technological one. “We can’t machine-learn our way out of this disaster, which is actually a perfect storm of poor civics knowledge and poor information literacy.”[7] He is one of the many believers deems that the information environment will not improve because the issue is human nature. According to this train of thought, internet growth combined with innovation and artificial intelligence will only allow more people to create and spread false information. Another justification for the lack of improvement of the information environment is that technology will create new challenges that cannot be countered effectively and at scale.

Other people have a more optimistic assessment of the situation: they believe that there will be an improvement because technology can help label, filter or ban false information and improve the public’s capacity to determine the quality and accuracy of information.

How to determine the reliability of an information

Should we only rely on big information providers like The Economist, The Times, The Wallstreet Journal, or BBC? What makes information reliable? How do we evaluate credibility? How are facts established as such? Although there are many guidelines that could help distinguish the honest and reliable information from fake news, the truth is, there is no one, foolproof way of differentiating the two. There are, however many steps one can take to ensure that an information is “most likely accurate”.

First of all, consider the source. We are constantly flooded by countless different sources of information; therefore, it is important to pay attention to where the “news” comes from. If it’s a source that has proven to be reliable in the past, most likely it still is. But when the information is relayed through an unfamiliar source or an alternative source, you may want to cross-check it with a more legitimate information provider.

Furthermore, the byline, or lack thereof can also be indicative of fake news, for example when the author simply is not a real person.

Moreover, articles relaying false information tend to cite official or official-sounding sources, and this is where going the extra mile and looking into them, will quickly show whether those sources back up the information or not.

Finally, check your biases. Confirmation bias tends to make people trust information that suits their beliefs and discount information that opposes them. Varying sources to seek out information is key in order to avoid falling prey of your own biases. Even traditional news can lack neutrality. In fact, the perception of bias and inaccuracy of news sources has been studied an organization called AllSides which exposes bias and gives multiple angles to the same story in order for the reader to get the full picture. 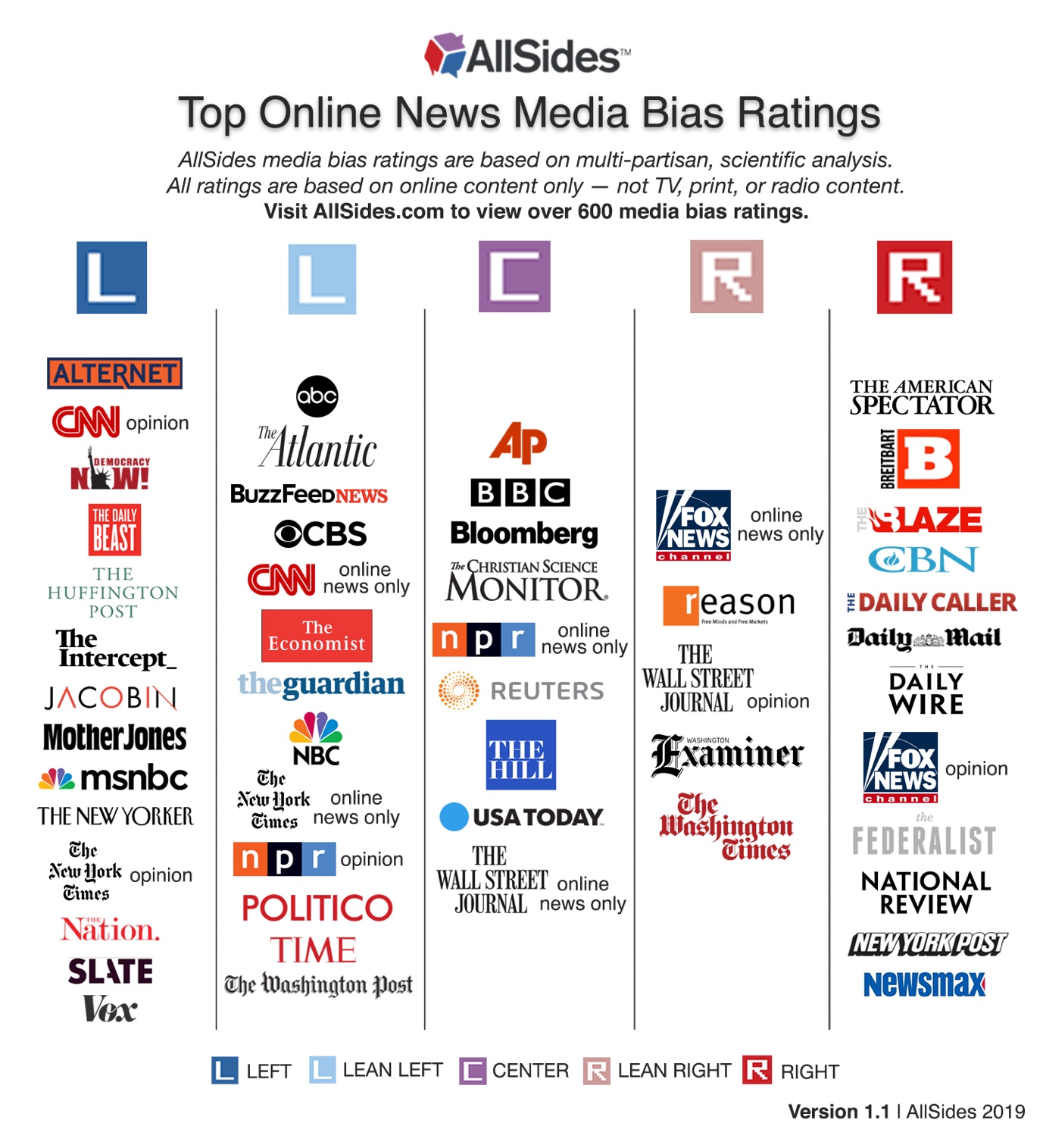 E. O. Wilson said, “We are drowning in information, while starving for wisdom. The world henceforth will be run by synthesizers, people able to put together the right information at the right time, think critically about it, and make important choices wisely.” Due to the immense amounts of (mis)information flooding our lives on a daily basis, it has become difficult to focus and search through the vastness of the internet for the truth, but ultimately, it is our duty as members of a society to do our best to make sure that what we read and what we share is the truth. Fake news do not only hurt people, they hurt our society as a whole.