Behind the scene in Davos: meeting with Ana Maria Montero and Olivia Chang

Davos, Switzerland: every year, this small ski-town resort in the heart of the eastern Alps becomes the stage of a major gathering: the World Economic Forum (WEF). Political leaders, business leaders and more globally, leaders from all sectors of society mingle during four days of conferences and discussions. By addressing the most pressing issues in the world, the WEF shapes regional, global and industry agendas, with a strong commitment to improving the state of the world[1].

The year 2020 was a milestone for the WEF, as it was celebrating its 50th anniversary. Among the most awaited speakers this year, we can cite climate activist Greta Thunberg and President Donald Trump. This year’s edition revolved around 7 themes: “Healthy Future”, “Tech for good”, “How to save the planet”, “Fairer Economies”, “Society & Future of Work”, “Better Business”, and “Beyond Geopolitics”.

HEConomist had the chance to meet two international journalists, Ana Maria Montero and Olivia Chang. Both were at the forefront of the event, engaging in many different interviews with key business leaders. Ana Maria Montero and Olivia Chang work as news correspondents for CNNMoney Switzerland, whose aim is to broadcast the most relevant news about finance, business, economy, culture and lifestyle produced in Switzerland. 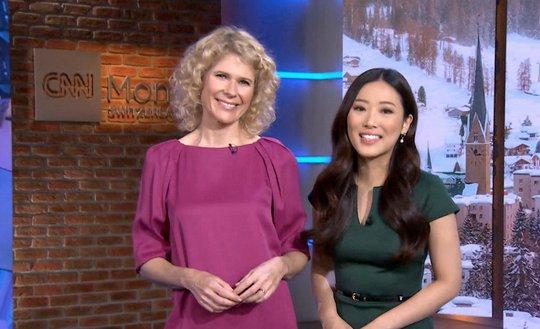 How did you both start your career as journalists ?

Ana Maria Montero: I always enjoyed writing and storytelling, but I never put it together with a career aspiration. I wanted to work for the Olympic Games in Atlanta, my hometown. They were looking for people who had journalism degrees with a specialization in broadcasting, so I decided to do my journalism degree and part of that was an internship at CNN.

In the course of my studies, I discovered television production, and I realized that I really enjoyed it. As an intern, and later as a production assistant and editorial assistant, I realized I was really hooked and that I had found my path. I started my career when I was really young. I was 22 years old when I made my first transmission to 45 countries, and what I can say is that there was a huge learning curve, and for every memorable moment, there was also a lot of sweat and tears where I learned and at the same time, grew as a professional.

Olivia Chang: My career in journalism began a few years ago. I always liked speaking, reading, writing, so almost naturally, I decided to study law. But when I arrived at a crossroad, and had to decide if I wanted to invest many more years in my law career, I decided to leave it and to study journalism. Actually, it was always there in the back of my mind and it only took me a few years to convince myself that it was the right thing to do. I pursued my master’s degree in journalism in New York. This was a defining period in my life. Being in a journalism school, where discussions revolved around current affairs, how to tackle ethics, and the business side of journalism, I realized for the first time that we had a bigger purpose. I felt that as a journalist, I had to achieve more than just trying to get good grades. 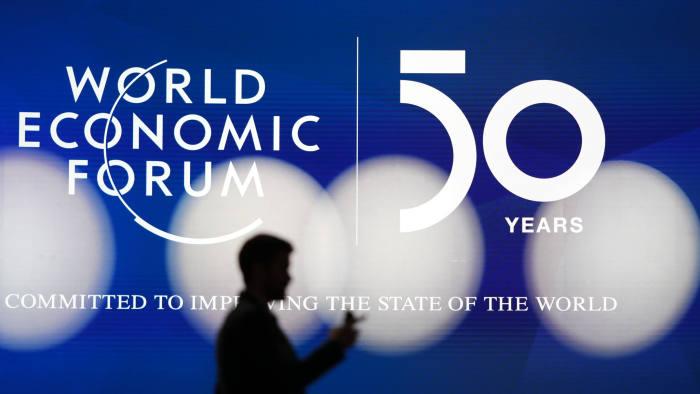 This year, 7 topics were at the heart of the World Economic Forum:

1. Healthy Future, 2. Tech for good, 3. How to save the planet, 4. Fairer Economies, 5. Society & Future of Work, 6. Better Business, 7. Beyond Geopolitics; among them which one generated the most impact, and why?

Olivia Chang: For me, definitely “how to save the planet”. I was exposed to many posters, banners and messages trying to promote more sustainable measures. I conducted videos, focusing on the organization of the World Economic Forum itself. It was very interesting to see that everywhere we went, we saw posters of the WEF outlining their efforts to be more sustainable (for example: you will see no meat on the menu). That, for the 50th anniversary, felt like a turning point. Some people may see it as baby steps, others as an acknowledgement of trying to be more green. What I can assert is that those were the messages that were really being exposed to us for the whole four days.

Ana Maria Montero: I agree. I feel like they were really making an effort to get that message across. How valid is it in the end? We don’t really know. To come back to the original question, I was impacted by many different things: being there for the first time, I was just impacted by the sheer size of the event. Sustainability was front and center, but also a lot of technology. All the big players were there: Microsoft, IBM, Facebook, Accenture, SAP. That really impacted me, because I did not realize how much these technology companies were invested in those meetings.

You both conducted many interviews during the WEF: could you tell us which one impacted you the most, and why ?

Ana Maria Montero: The interview with « Bertrand Piccard, President of the Solar Impulse Foundation ». To the outside audience, he is seen as the Swiss sustainability champion. It was really one of the most interesting interviews because of his strong perspective on sustainability and climate change. I really wanted to do this interview to understand how concerned he was, what he thought of the discussions around climate change at the WEF, how he really saw Greta Thunberg and President Trump, and what the rest of the world is doing. Are we too late? Can we still do something at this point in time? For me, it was really fulfilling to be able to talk to him.

Olivia Chang: The most impactful interview I did concerns the SIX offer to buy BME (Bolsas y Mercados Españoles), the Spanish stock exchange operator, which I did with Jos Dijsselhof, the CEO of the Swiss Stock Exchange Operator SIX. For a small country like Switzerland, this is a really big deal because it changes the landscape in Europe. It really put Switzerland on the map of the world financial market. This offer really made news in Switzerland, and in my opinion, it was very important because it showed how such a momentous deal could be made among other issues such as sustainability and economic growth.

Ana Maria Montero: These topics are always in the spotlight and there is always something to say. I spoke to female CEOs about the latest Equality 2020 report – The WEF Global Gender Gap Report 2020. From an economic point of view, the gap is widening more and more. How can this gender issue be addressed? Through education, with role models, or simply by investing more in promoting equality ? As a woman and as a mother of two daughters, I feel that I, and even my daughters, will not see the closing of the inequality gap in our lives.

Olivia Chang: In the streets of Davos, everywhere we looked, we saw something about the Sustainable Development Goals (SDGs). Many companies were perceived as promoting sustainability or supporting the SDGs. The issue of gender was addressed as an important part of the SDGs. Gender equality is part of the SDGs as a goal: « Achieving gender equality and empowering all women and girls ».

Could you describe, in a few words, what your experience at the WEF felt like ?

Olivia Chang: What I like, personally, is how dynamic it is. For a lot of the year, we do interviews in the studio. When we are in a small ski town and suddenly get so many international figures coming in, automatically, we are getting a different vibe. We are no longer in Switzerland. We are everywhere. Just being there for a whole week, being fully immersed in this experience, doing interviews generates a whole other level of excitement.

Ana Maria Montero : I have to agree with that. One of the things I love about my job is talking with people. Davos gives you the opportunity to meet so many new people. It’s a bit surreal. There is this creative energy. I was telling my husband that it reminded me of being in Los Angeles, where everybody’s working on something, everybody’s creating something, there is this constant conversation about how to push things forward.

What are the main conclusions that you can draw about the WEF?

Olivia Chang: It is always hard to answer such a question. How do you measure the success of the dialogues taking place at the WEF? We don’t know which conversations go on behind the scenes. The WEF goes on for four days, we do not know what happens during the rest of the year and what conversations leaders are having.

Ana Maria Montero: Reaching a conclusion is a challenge, but this meeting brought together international leaders from around the world. One thing I can highlight from the Davos meeting was a face-to-face dialogue to plan a common agenda on global, regional and national issues, in which not only the economy was discussed, but also other issues such as climate change, health, gender, industry… The WEF meeting is not only to get an agreement signed, but to start a face-to-face conversation on the issues at hand. I know that the results are yet to be determined, but with these discussions, I see a positive starting point for the agenda planning. The impact of the WEF on the general population depends on what heads of states and leaders bring back to their home countries. Can they transmit the information that they really need, in order to jump on the train of “climate change”? 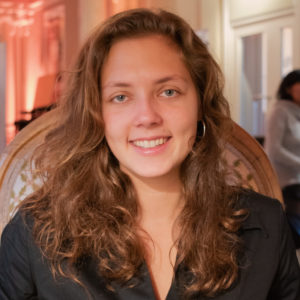 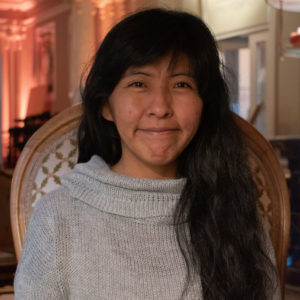