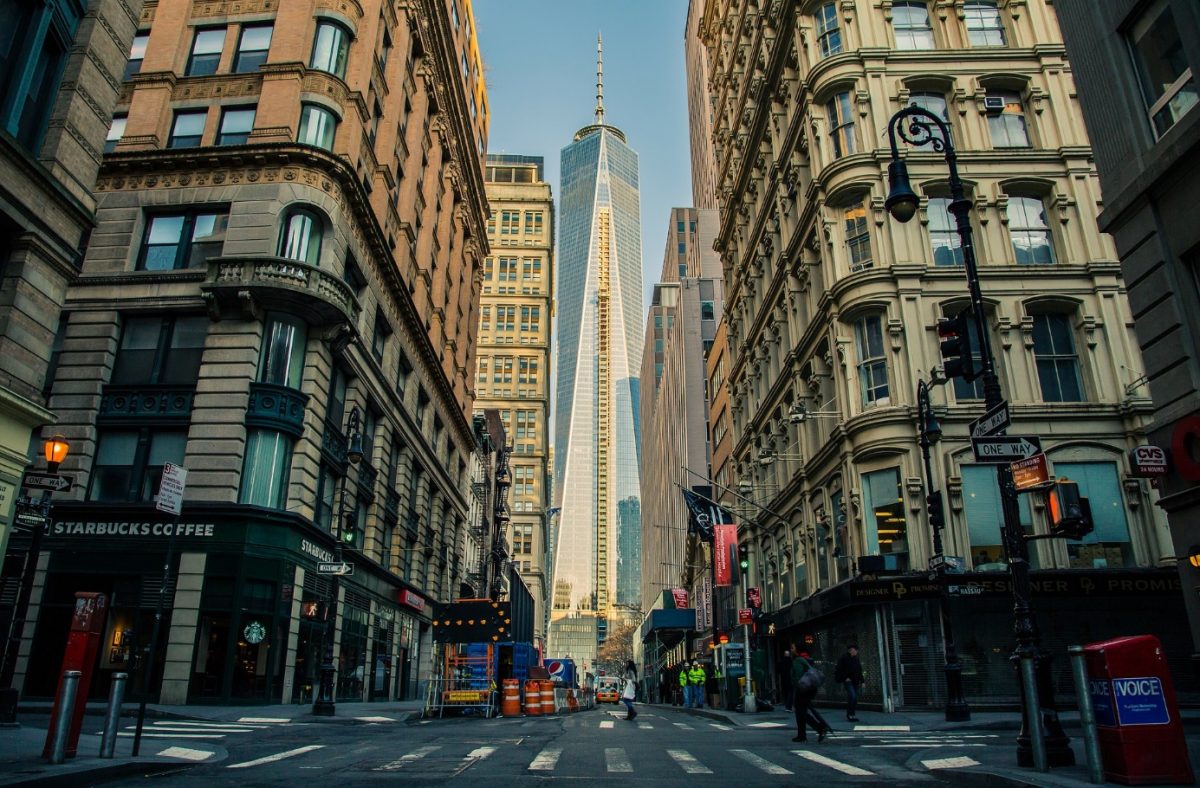 How not to measure happiness: alternatives to GDP

“When a measure becomes a target, it ceases to be a good measure”

GDP is one of the core measurements in political economy, its stability and growth is a top priority for governments and central banks, but why is it so?

As World War II seemingly came to an end, developed nations of the world (mostly from Europe and the Americas) felt the need to define a framework for international financial cooperation in a post-war world. Leaders of the world gathered in Bretton Woods, NH, USA and participated in the now-famous Bretton Woods Conference. Of that conference resulted four agreements that would shape our economies up to today.

What even is GDP?

GDP (or Gross Domestic Product) is a measurement of the value of all final goods produced in given region in a given time period, usually per country per year. In simpler words, it is the total income generated by a country in one year. Its creation is often attributed to Nobel Prize Winner Simon Kuznets who introduced the indicator to the US congress in 1934, yet its roots go back to 18th century England. There exist slightly altered measurements such as GNP (Gross National Product) that instead measures what is produced in the country by local companies and abroad by companies based in the country of interest or GNI (Gross National Income) that shifts the perspective from production to income. All of these indicators have their use but are not as widely employed and every point made about GDP can be made about them as well.

As the measure progressively spread in all countries in the world, it became the main indicator used to compare countries between each other and a synonym of well-being, but can we determine the well-being of a population by measuring its production?

Despite criticisms by some economists, GDP has been and still is a fairly accurate measure of economic health and overall well-being. As illustrated by the two graphs below, there is a clear positive relationship between income levels and life satisfaction. Who said money doesn’t buy happiness? 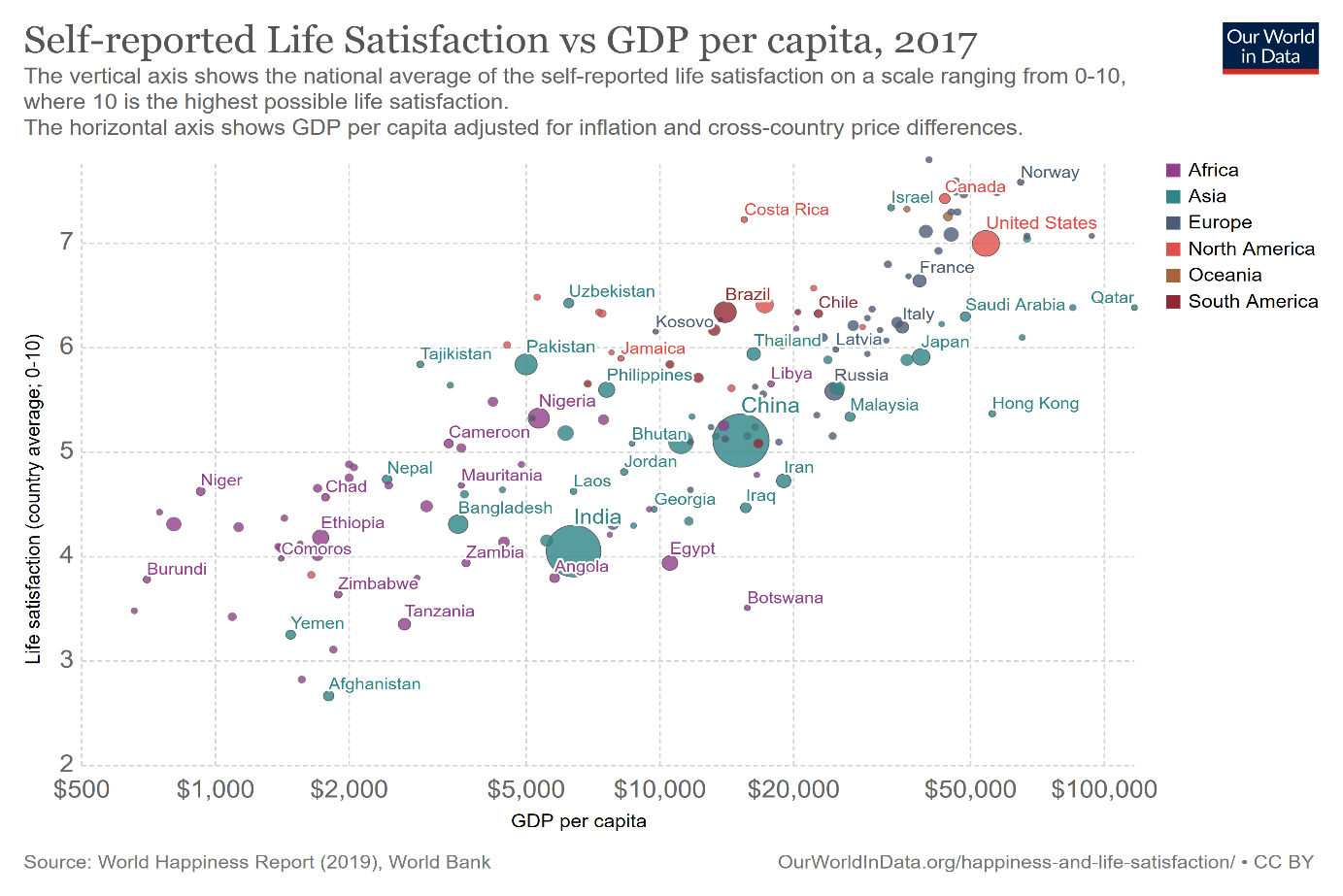 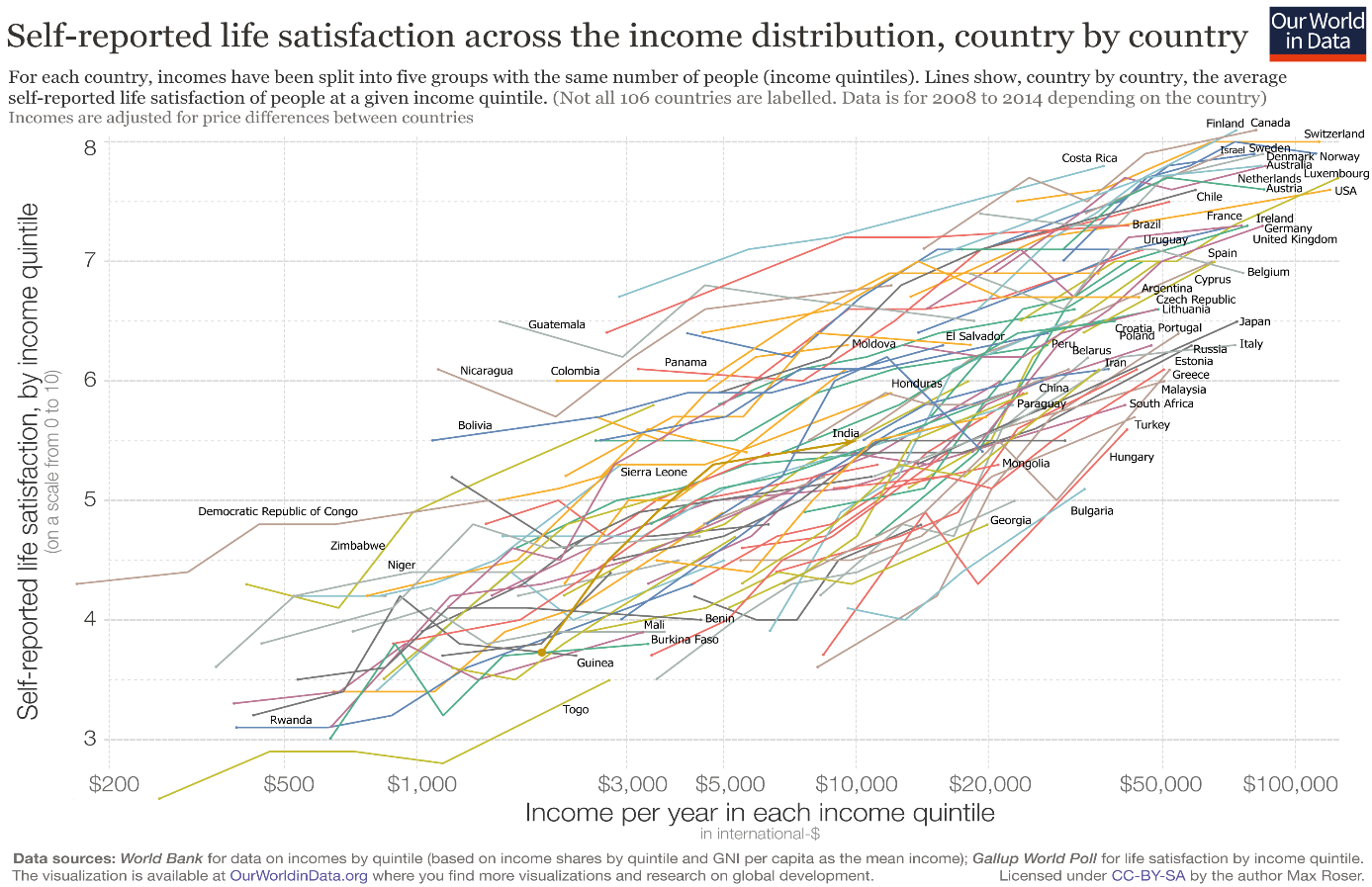 In addition, there is an empirical correlation between GDP growth and unemployment, as illustrated by Okun’s law; a relationship that describes how a decrease in GDP increases unemployment and vice-versa. Unemployment and other financially difficult situations often being a major source of discontent and stress, it is no wonder why politicians and economists put such emphasis on it. GDP growth is, therefore, a crucial determinant of happiness in the sense that employment lifts financial constraints. GDP growth is also a strong and convincing argument for any politician seeking re-election, giving them good reasons to focus on it.

GDP, however, falls short in many instances. Since the indicator has not been changed in nearly 80 years, it does not and cannot account for issues such as environmental damage or social justice and more generally, the increasingly complex world we live in (remember that in 1944, climate change was almost unheard of and colonialism and segregation were still a thing.) For a more exhaustive list, here are a few aspects of the economy that GDP cannot fully grasp:

And here are numerous dimensions of well-being not captured by GDP:

According to the 2020 World Hapiness Report, per capita GDP only helps to explain part of the reasons why people are happy, with variables such as “social support” or “life expectancy” having an effect of similar magnitude. 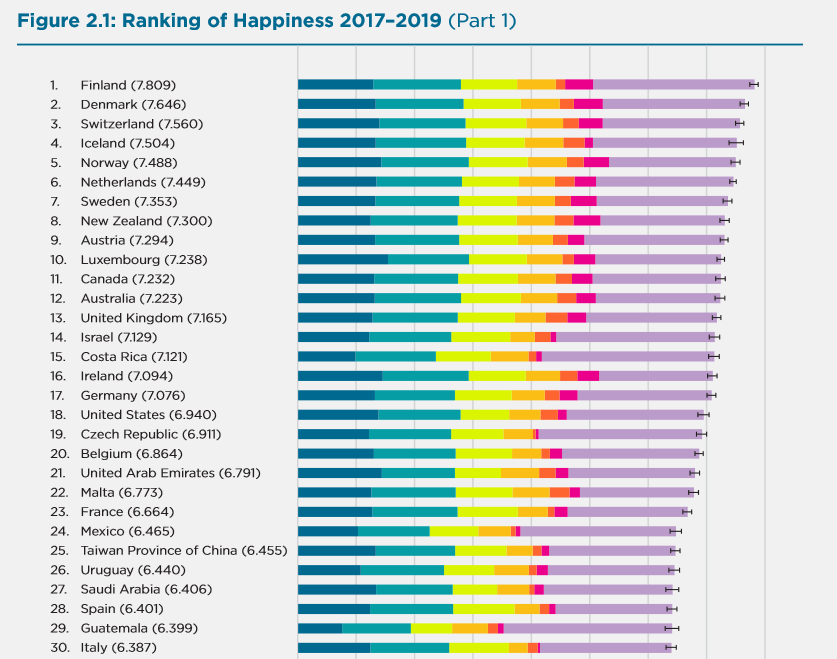 There are still aspects of well-being that are correlated with economic growth, as illustrated by Nicholas Oulton in 2012; as per capita consumption increases, infant mortality decreases, life expectancy increases and income inequality decreases. 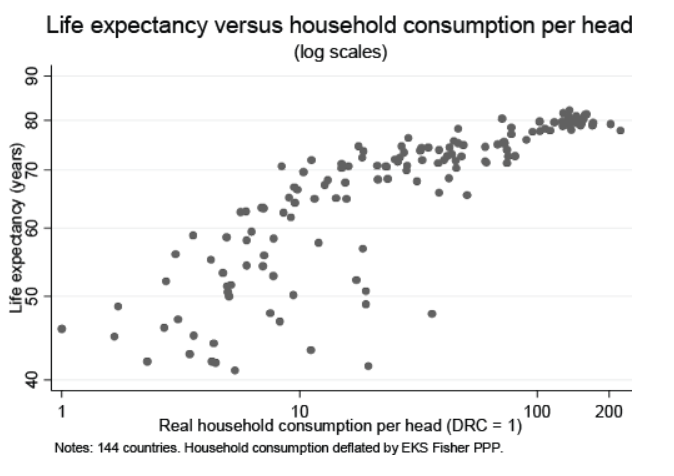 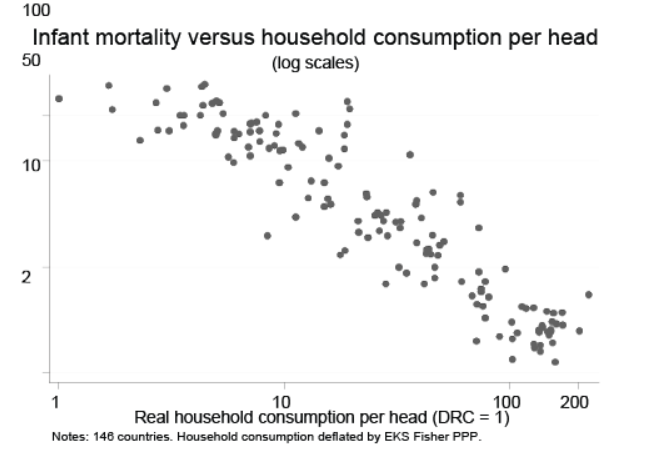 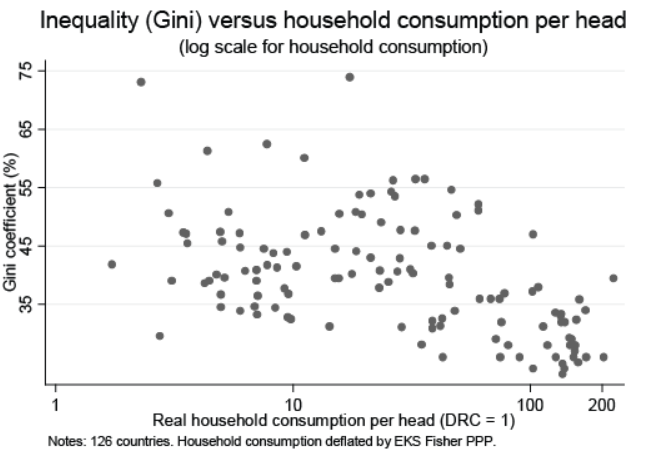 These correlations should however not be taken as a causal relationship, as more recent data has shown that despite economic growth, these indicators can still evolve in an undesired direction. The US being the richest country in the world in terms of per capita GDP, we would expect them to be champions in most indicators of well-being, this is, unfortunately, not the case. In terms of life expectancy, not only is the US stagnating or even declining, it also more generally ranks significantly lower than other developed countries and ranks higher in terms of mothers dying during labor. Finally, as illustrated by French economist Thomas Piketti in his 2014 book Capital in the 21st century, despite stable growth, the US has seen a gradual increase in income inequality since the end of WWII, the income gap widening at an accelerating rate since the 70’s. A trend that is also true for countries such as France, the UK or Japan, but is the strongest in the US. 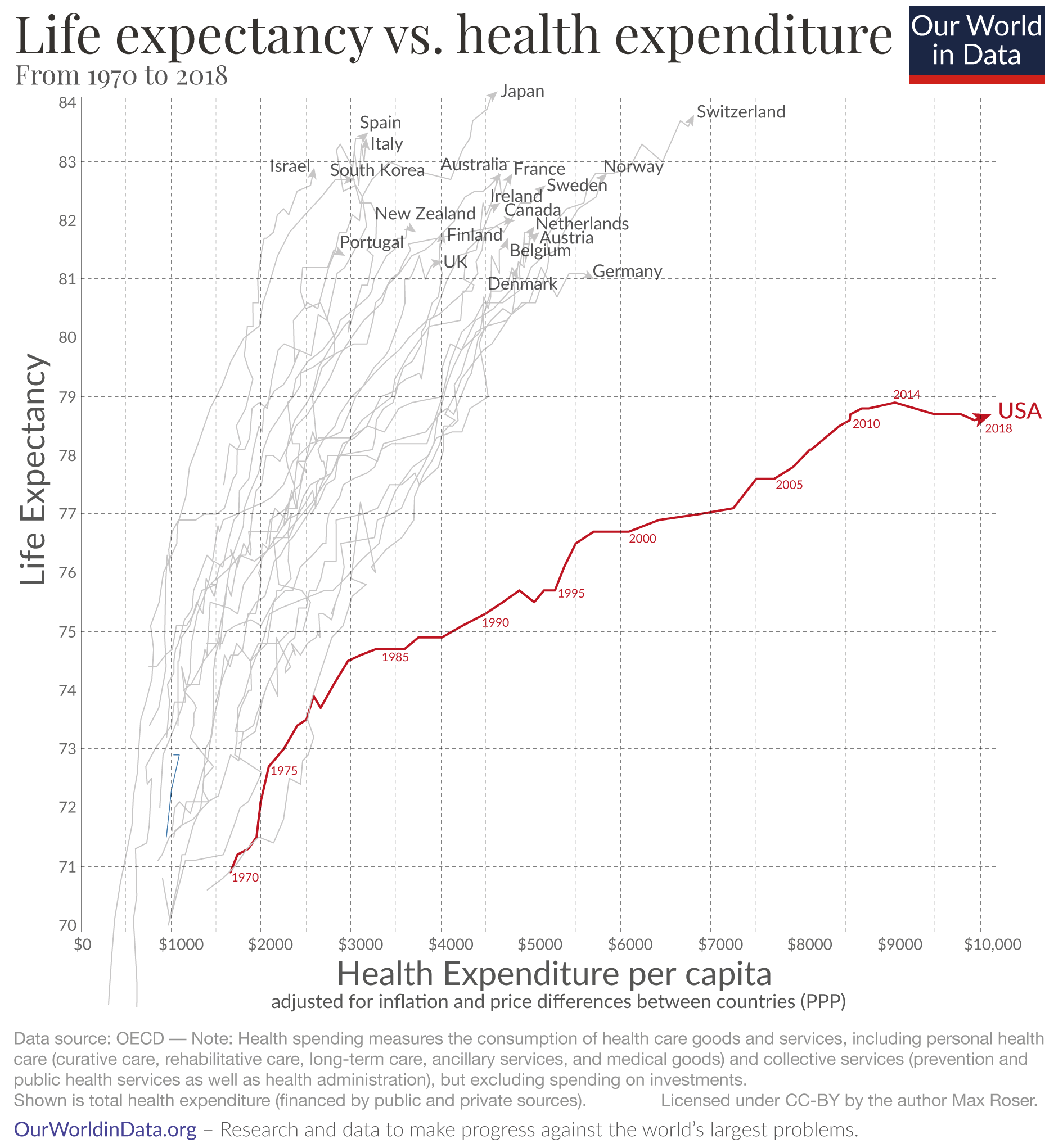 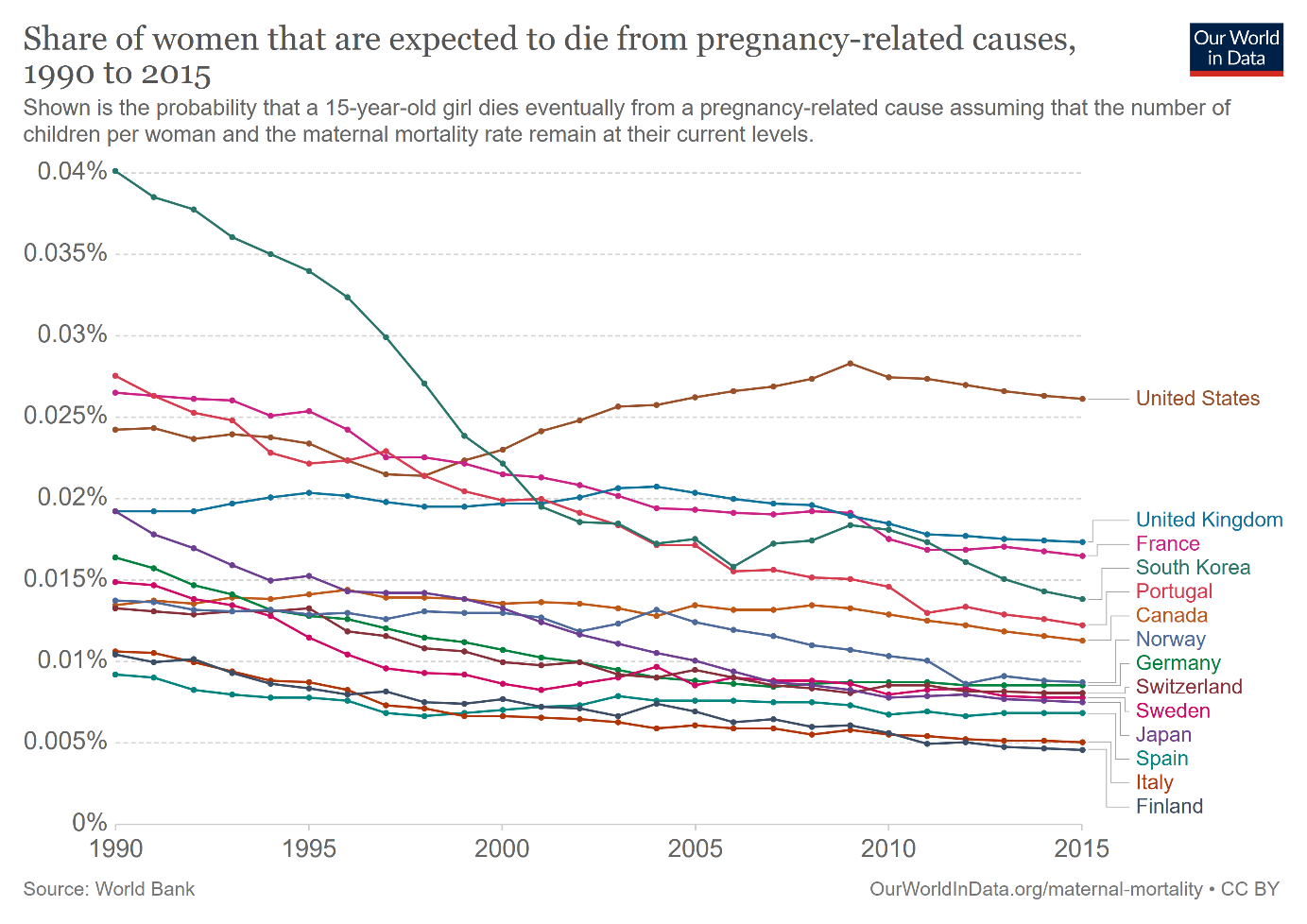 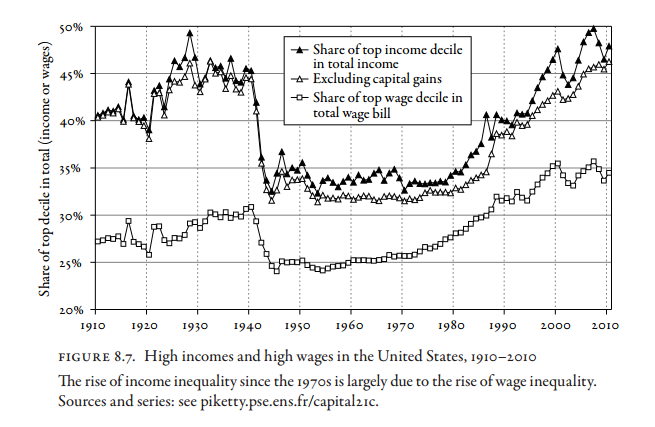 Choosing the United States as example to disprove the correlation between economic growth and well-being can be seen as cherry-picking and in some way, it is. But the broader point is that it is not economic growth in itself that promotes well-being, it is what we do with this wealth that will lead to improvements in everyday life. In his book “Development as Freedom”, 1998 Nobel Prize in Economics winner Amaryta Sen states: “Economic growth can help not only in raising private income, but also in making it possible for the state to finance social insurance and active public intervention. Thus, the contribution of economic growth has to be judged not merely by the increase in private income, but also by the expansion of social services, including social safety nets that economic growth can make possible.”

It is not the increase in GDP that leads to well-being, but the focus on public spending such as education and healthcare made possible by the additional available resources that improves the lives of individuals.

After taking a glance at the data, it seems that GDP is unable to fully grasp all dimensions of our well-being, but what if that was never intended? Kuznets himself warned politicians and economists when he introduced GDP in 1934: “The welfare of a nation can scarcely be inferred from a measurement of national income as defined by the GDP.” The transformation of GDP from an accounting measure of output to a measure of success and well-being is eloquently explained by 2001 Nobel Prize in Economics winner Joseph Stiglitz: “Information affects behavior. […] How we describe success affects what we strive for: if GDP is what we think is success, people will strive for GDP.”

The alternatives to GDP

The flaws of GDP as a measure of well-being don’t come from its inherent design, it comes from our interpretation of it: GDP is a poor indicator of happiness because it doesn’t measure happiness but only correlates with it if we, as a society, make good use of the additional resources at our disposition. Many economists, governments and international organizations advocate for a new way of measuring our collective well-being, one that would take GDP into consideration but would at the same time capture other dimensions of our well-being such as those listed above.

The beginning of the article stated that all countries had adopted GDP as a primary indicator of well-being. That was a lie. There is one country in the world who has, for the past 15 years, measured their happiness not by GDP but by Gross National Happiness or GNH: Bhutan. The notion, officially adopted in 2008, rests on four major pillars: (i) sustainable and equitable socio-economic development, (ii) environmental conservation, (iii) preservation and promotion of culture and (iv) good governance. The country as a whole has rejected modern economic conventions and neoliberalism to focus more spiritual values, notably by pledging in their constitution to protect the environment and prevent ecological degradation, as well as conserve 60% of the country’s land as forests.

Despite this focus on happiness, the country does not fare well compared to the rest of the world by ranking 95th in the UN 2020 world happiness report. Additionally, the country ranks 138th in terms of maternal mortality, it has a literacy rate of about 67%, a poverty rate of 39% and a clean water access rate of 36%. Critics also point at the emphasis on Buddhist values with questions such as “how often do you meditate?” in national survey and the ethnic cleansing having taken place against the Hindu population in the country in the late 80’s. This article goes more in depth in the issues of GNH and the worries of the Bhutanese population.

The most credible attempt yet – The HDI

The most credible attempt to reform our measure of well-being comes from the United Nations: The Human Development Index or HDI. The indicator equally weights a life expectancy index, an education index and an income index. The reasoning behind specifically choosing these indicators is that economic growth does not necessarily mean increases in human capital such as health or education. Therefore, balancing income with indicators of human capital can help to illustrate a more accurate reality.

Despite being a real step forward relative to GDP, the indicator remains incomplete. Having been created in 1990, it does not account for variables such as environmental degradation or income inequality, which were at the time not deemed as important as human capital accumulation. Added to the fact that literacy and life expectancy are highly correlated with income, this choice of indexes places the richest countries, whose environmental impact is the strongest on top of the ranking. Secondly, it weights all three indicators equally, meaning that a country could compensate one factor for another.

The puzzle of finding alternatives

The arguments against GDP as a measure of well-being are not new and the alternatives are numerous, such as the OECD Better Life index, a comprehensive indicator that ranks countries on 11 dimensions such as work-life balance, environmental damages, income inequality and many more. You can click here and construct your own indicator by weighting each dimension according to your priorities.

Reforming a universally adopted metric is no easy task and in the case of GDP, no one has succeeded yet, for many good reasons. Each new way of measuring well-being has been met with valid criticism: how can we put a number on environmental damages when we do not have a reliable way to assign a monetary value on things such as biodiversity or the beauty of a landscape? Can we use the practice of a religion or spiritual movement indicator or happiness in a universal metric when some countries follow religious practices while some move towards secularism and atheism? In the case of the HDI, on what basis are we equally weighting all three indicators? On what basis could we argue that one variable is more important than another and therefore deserves a bigger weight? Addressing these questions would expand the scope of this article far beyond what was intended, but mentioning them may incentivize the reader to critically think on potential answers. As we have covered a small sample of the alternatives to happiness indicators, we as a society should recognize that clever solutions already exist and should follow the wise advice of the French writer and philosopher Voltaire: “Do not let the perfect be the enemy of the good.”