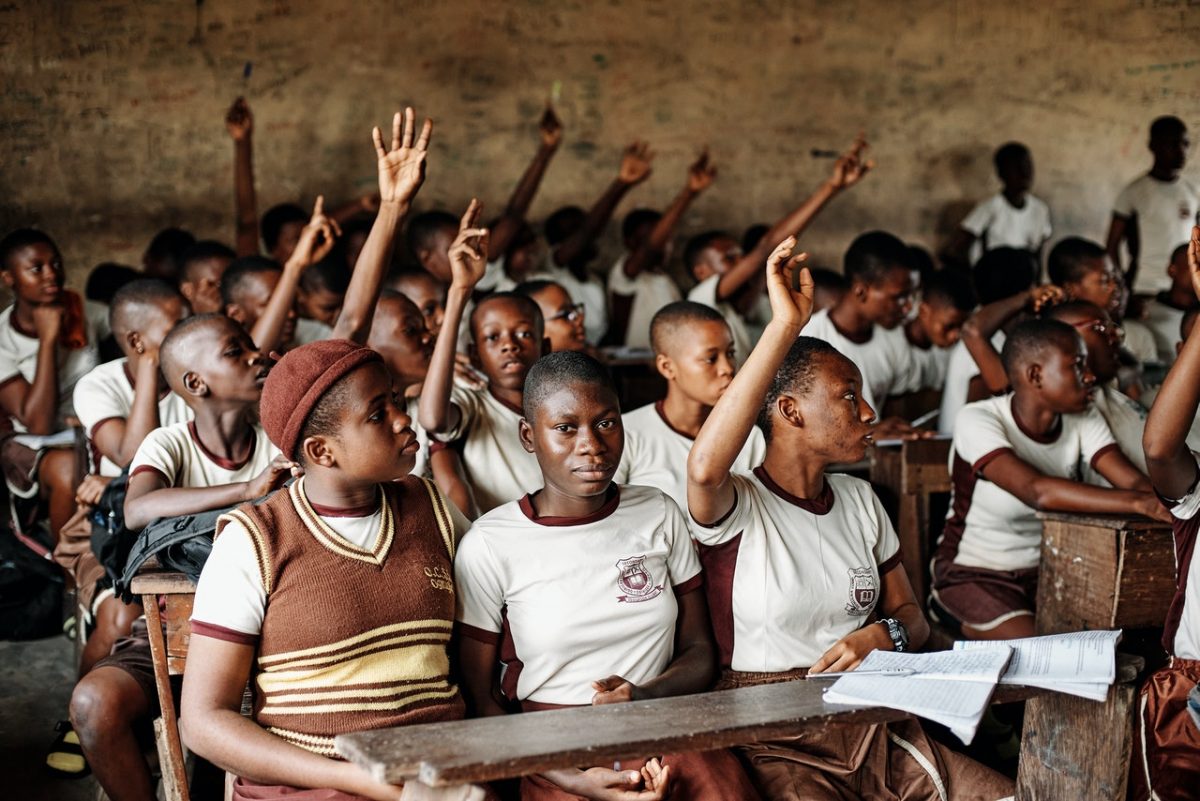 It is no secret that education is a key driver for growth and development in a country. Research is abound with studies extolling the virtues of education. On a micro level, education is a powerful tool for providing children and youth with the knowledge, skills and confidence to face daily life challenges and take advantage of economic and lifelong learning opportunities. On a macro level, education serves as a stimulus for reducing poverty, achieving gender equality and fostering economic growth and social development in a country.

Yet looking at global statistics, education still appears to be lacking in many regions around the world. Before the coronavirus crisis, projections showed that more than 200 million children would be out of school. Moreover, 617 million youth worldwide lack basic mathematics and literacy skills. The data also reveals heterogeneity amongst different groups and regions. For instance, in countries affected by fragility, conflict and violence, girls are 2.5 times more likely to be out of school than boys. More than half of children that have not enrolled in school globally live in sub-Saharan Africa. In low- and middle-income countries, children with disabilities were 19% less likely to achieve minimum proficiency reading than those without disabilities. Also, in 2017, 4 million refugee children were out of school.

As disheartening as the statistics may seem, progress has definitely been made. In 2000, the commitment to improving education worldwide was embodied in Goal 2 of the UN’s Millennium Development Goals (MDGs), which aimed to “achieve universal primary education” (MDGs, Goal 2). Since then, the total enrolment rate in developing regions reached 91% in 2015 and the worldwide number of children out of school has dropped by almost half. Literacy rates worldwide have increased and many more girls are in school than ever before. When the MDGs expired in 2015, a new set of goals, namely the Sustainable Development Goals (SDGs), were developed to carry on the momentum generated by the MDGs. For education, the new goal aims to “ensure inclusive and equitable quality education and promote lifelong learning opportunities for all” (SDGs, Goal 4).

In the spirit of achieving this goal, developing countries have become increasingly interested in adopting effective education policies. The question that arises, however, is what makes an “effective” policy? Various policies and interventions have been tried and tested around the world with differing aims, results and levels of success. This article will present three different types of interventions commonly implemented as well as the evidence of their success (or lack thereof). While these interventions are not at all exhaustive or representative of all interventions implemented, they provide an interesting overview of what is currently being done to tackle the issue of education around the globe.

According to a systematic review paper by Ganimian & Murname (2016), supply-side interventions in education can be further classified into four main subcategories of interventions that aim to:

Interestingly, evidence shows that providing schools with more resources, such as textbooks and libraries, does not improve student achievement. This is because these resources are often not used, or other times, do not significantly alter children’s daily experiences at school. Providing children with resources, such as desktop computers or laptops, have also proven to be ineffective. For example, Malamud and Pop-Eleches (2011) found that low-income students aged 7 to 19 years in Romania who were offered vouchers to purchase personal computers in 2004 performed worse in math, English, and Romanian by 0.25, 0.33, and 0.30 standard deviations (SDs) respectively. The apparent explanation is that students offered a voucher reported spending more time playing computer games and less time reading and doing homework.

Interventions that have seen more success often focus on meeting the individual learning needs of heterogeneous student populations. For instance, a common strategy is to reduce the number of students per classroom. The rationale behind this is that teachers have time to afford more attention to individual students. Helping teachers personalize instruction, however, is also of crucial importance. For example, evidence from Muralidharan and Sundararaman (2010) found that providing teachers in Grades 1 through 5 in Andhra Pradesh, India, in 2005 with the feedback on their students’ achievement, accompanied by initiatives that build teachers’ capacity or make their jobs more manageable, improves student achievement, through improved teaching.

Such policies, however, often have unintended consequences. For instance, improving teachers’ skills and qualifications can sometimes lead them to transfer to better-ranked schools, therefore widening the gap between better-performing and poorer-performing schools. Similarly, splitting classes have also shown to create disparities between more able versus less able students.

These interventions use incentives to influence the behaviour and preferences of teachers, households, and students. Most notable are incentives for parents that have the objective of encouraging demand for and utilization of education services. According to Ganimian & Murname (2016), these interventions can once again be subcategorized into four main categories of interventions that aim to:

Interestingly, all these interventions have shown evidence of increase school enrolment and attendance. For example, a study by Lucas and Mbiti (2012) examined the impact of fee elimination in primary education in Kenya in 2003 and found that the policy indeed increased the number of students who completed primary school. Providing medication (e.g. deworming drugs) as well as micronutrients (e.g. iron supplements) have also proven to increase school participation by improving the cognitive and physical abilities of children.

Where such interventions often lack, however, is improving student achievement. What does seem to have a positive impact, however, is providing merit scholarships to students as well as providing information to parents of school quality and expanding their access to other schooling options, such as private schools. In the latter, scholarships enable already high-performing students to have access to more and better-quality resources, reduce the financial burden of education and provide an intrinsic motivation to achieve more. For parents, enhanced information pushes parents to demand change in public schools while expanding access to better schooling gives the opportunity to high-performing but relatively poor students to access better-quality education.

Such interventions, however, also do not come without limitations. For instance, in the study by Lucas and Mbiti (2012), a negative side-effect of fee elimination was that the increase in enrolment placed strain on public school resources, which thus impacted negatively students’ scores, as teachers were no longer able to give individual time and attention to each child. Durability of the positive effects is also an issue. For example, in a study by Andrabi, Das, and Khwaja (2009) which looked at the effect of providing parents (and schools) in Punjab, Pakistan with a report card that displayed the test scores of their own children and the average scores of students in all schools in each village, they found that children’s test scores in English, math and Urdu did improve by an average of 0.11 SDs, but that this gain persisted for only 2 years after the intervention.

This type of intervention often takes two forms. The first involves providing information to communities about opportunities to get involved. The objective of this initiative is to increase community engagement, enabling community members to put pressure on underperforming schools and adding an additional layer of “checks and balances” to school management. A second approach is to provide schools with monetary grants that community members play a role in administering. The objective here once again is to put resources in the hands of those who have and will use them in the best interests of the school.

Evidence on these two interventions, however, is mixed. For the former, research suggests that more information does not consistently translate into greater involvement. For example, Banerjee, Banerji, Duflo, Glennerster, and Khemani (2010) found that providing information to communities in Uttar Pradesh, India, in 2005 about the existence of village education councils, their membership, resources, and roles did not increase the involvement of parents, local authorities, and teachers in public schools, and did not reduce student and teacher absenteeism. For the latter, the success of the intervention often depends on the pre-existing level of community capacity. Parents and communities that lack authority and capacity to use the additional funds do not guarantee improved school quality.

What is the solution?

Reviewing the interventions allows us to see that there is no hard-and-fast rule to improving education in developing countries. Indeed, the success of an intervention often depends on numerous context-specific factors, including institutional elements, cultural attitudes of authorities, parents and communities towards education, health and nutritional status of children as well as the existence of capacity-building resources. Thus, possible recommendations for policymakers would include, firstly, analysing and understanding the context well. For example, in settings where many children are out of school, it may make sense to focus on demand-side interventions. In settings where teacher capacity is very low, making their job easier – for example, by tracking students by ability or preparing lessons for teachers – may be a better option. Moreover, what is crucial for the success of an intervention is the design and implementation of the intervention itself. Lesson-learning from past experiences, consideration of heterogeneity of effects across groups and clean and systematic implementation of interventions are just some ways policymakers in developing countries can move forward in improving education effectively.