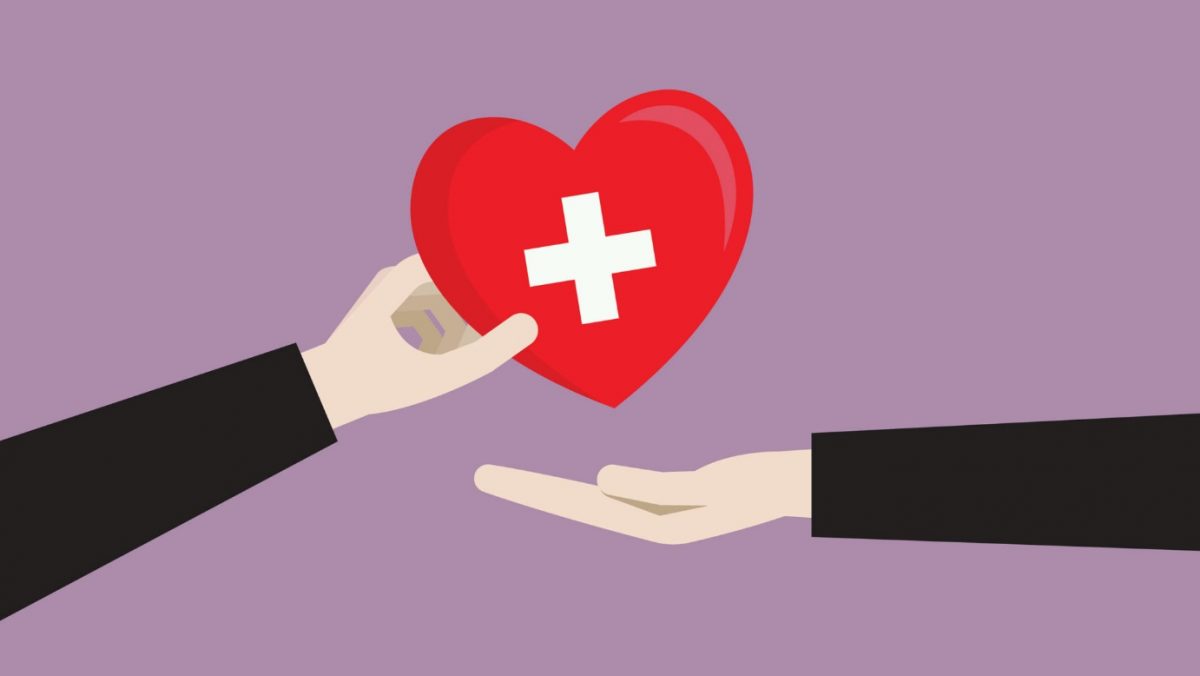 The economics of organ donation

On May 15th, Swiss citizens will be brought once again to their quarterly ritual of voting. This time, three objects will be submitted to the people’s will: a modification of the law on cinemas and streaming services, Switzerland’s contribution to Frontex, the European border agency, and a modification of the law on organ transplants. This article will focus on the latter.

Why do we need to reform organ transplants laws?

In Switzerland, there are currently 1462 people waiting to receive a life-saving organ. In 2021, only 520 organs were transplanted and 72 people died last year while waiting for a transplant. 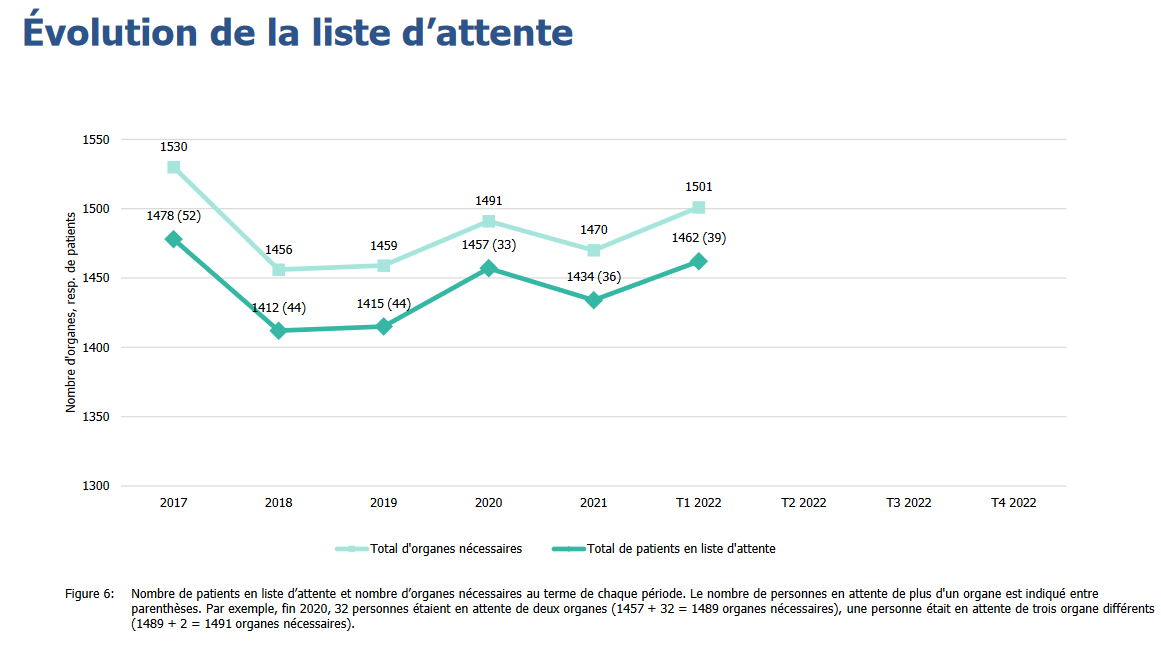 Those numbers are not unique to our country: all over the world, the number of patients waiting for an organ donation far exceeds the number of donors, dead or alive. Yet, those numbers do not reflect the will of most individuals: according to a survey by Swisstransplant, Switzerland’s national organ transplant agency, 80 to 90% of individuals declare themselves as favorable to donating their organs upon their death. Yet death comes unexpectedly, such that the will of the patient is often unclear, which leaves the decision in the hands of their relative, of which 60% refuse to harvest their loved one’s organs.[1] So, what can we do about that discrepancy? Enter the proposed reform to the law on organ transplants. Let’s get legal.

From opt-in to opt-out: the proposed new law

Under current law, Switzerland follows the “opt-in” principle, which dictates that unless the patient has explicitly stated their willingness to give their organs, hospitals are not allowed to harvest them, though it is possible for relatives to make that decision after a patient’s death. The proposed law would flip that principle on its head by switching to an “opt-out” system. Opt-out systems, also called “presumed consent” systems, assume that, unless a patient has explicitly stated their unwillingness to donate their organs, hospitals are allowed to harvest their organs for donation. Once again, relatives can object to the harvesting if they think it is what the patient would have wanted.

But is this going to change anything? Will it lead to more lives saved thanks to a higher number of transplants? It is now widely recognized that a presumed consent system is better than an opt-in system in terms of lives saved, which is why now a majority of European countries have switched to this system. 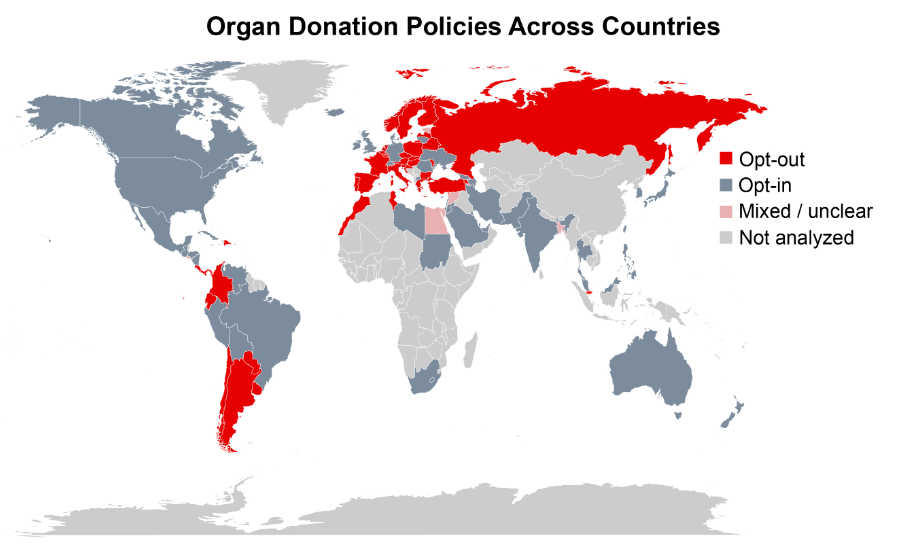 By looking at some key European countries, we can see how the proportion of donors drastically changes depending on the system. If we compare pairs of countries that are assumed to be very similar in terms of culture or attitude towards religion, we can see that the number of individuals considered organ donors by law drastically changes. For example, Germany has an opt-in system while Austria has an opt-out system. Despite both countries being very similar, their proportion of organ donors differs significantly. 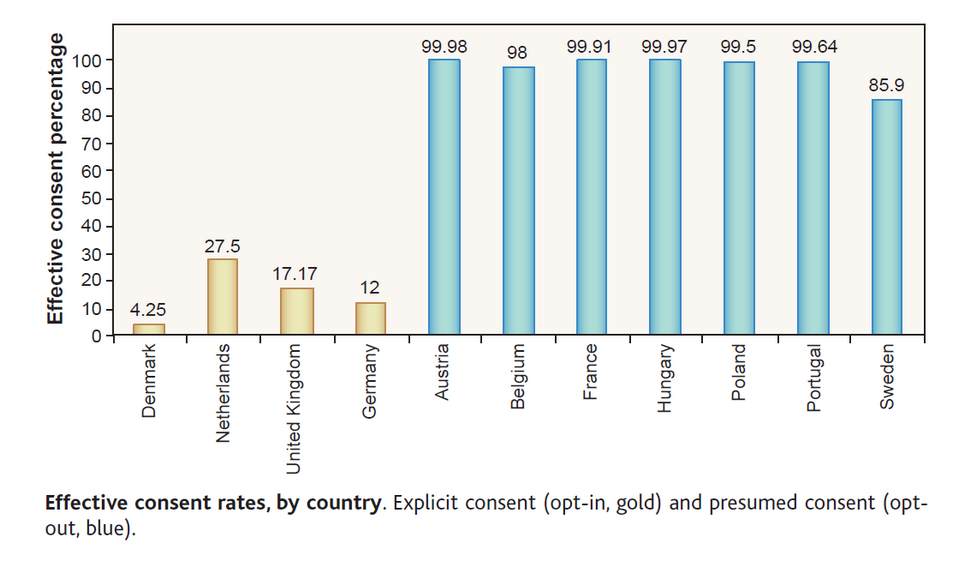 This change is due to what we call the power of “default options”. As highlighted by Nobel prize in Economics winner Richard Thaler in his books “Nudge” and “Misbehaving”, changing the default option of a choice radically changes the outcome (for the better), without impeding on an individual’s freedom of choice. This concept, coined “libertarian paternalism”, has been implemented in multiple real-life decisions. The principle of libertarian paternalism is to overcome an individual’s behavioural shortcomings by making the best choice the easiest while still leaving them the option to make their own decision.

The best exemplification of how default choices change outcomes might be that of retirement savings. In the US, retirement saving plans are heavily tied with employment. When getting a new job, employees can enroll in a savings program, to which their employers will also contribute up to an extent. Yet the simple fact of having to decide to enroll may discourage people, especially for young people who might put off the task and end up never doing it because they do not feel the immediate need to save, or for those with low financial literacy, who often happen to be the poorest demographics. By simply enrolling employees by default and giving them the option of opting out, researchers managed to increase the rate of employees enrolled in savings plans from 65% to 98% after 3 years. Not only did more participants join, they also joined sooner than under an opt-in system.

But while those 90+% rates of eligible donors look very encouraging, they do not mean that every person who would be eligible to donate their organ upon death ends up doing so. Since 2017, France has replaced their opt-in system with an opt-out system. Despite a large increase in the total number of organ donations, medical professionals still ask the patient’s relatives before making a decision, which decreases the number of possible organs available for patients on waiting lists. Here lies one of the shortcomings of changing default choices in matters as sensitive as organ donation. Haven’t experts come up with a better system?

Better does not mean best

We’ve seen how an opt-out system provides advantages over an opt-in system, but that does not mean that it is the best solution. There is indeed an even better system: mandated choices… Under such a system, individuals would be asked to make their choice explicit at some point in their life, typically when renewing their driver’s license or ID. That choice would then become legally binding. That way, most people would be faced with that decision in their life and would be able to decide for themselves, which would avoid the need for relatives to make guesses on what the individual would have wanted. Thaler and Sunstein advocate for mandated choice, arguing that this system is the most respectful of patients’ will and leaves not ambiguity to be solved by relatives.

In the state of Illinois, US, such a policy has been implemented: drivers renewing their license must answer the question of whether or not they would be willing to give their organs upon their death. The result? Over 60% of the state’s population is registered as a donor against a 38% national average. Such policy has also been implemented in Canada.

But that solution also has its issues. As highlighted by Canadian researcher Nicole Robitaille, most people do not expect to be asked such a sensitive question when filling out administrative papers. This might scare people and lead them to refuse to donate their organs.

“In Ontario, as in many jurisdictions, the decision to donate organs happens most often when people renew their driver’s license. Trouble is, when they walk into a motor vehicle office, people aren’t thinking “organ donation”; they just want to update a license. So, when suddenly asked to become an organ donor, they’re caught off guard. And when people are asked to make a decision that they don’t feel they’ve put adequate time and effort into considering, they choose not to decide. They put it off.”

Enter the power of nudges, those little pushes that encourage people to make the choice they truly want. Experiments conducted in Ontario, Canada and in the UK show how it is possible to overcome that element of surprise. By providing people with a brochure on organ donation while in the waiting line, researchers were able to gently introduce the question of organ donation, increasing the rate of positive responses. Even more effective is to ask people preliminary questions on their attitude towards organ transplants, such as “If you needed a transplant, would you get one?” or “How would you feel if one of your loved one needed a transplant but couldn’t get one?”. These small nudges force the individual to consider the perspective of the person receiving the organ instead of that of the donor, which appeals to their feelings and increases enrollment rates. After an eight-week trial period, registration for organ donations increased by 143%, with similar results found by an NHS study in the UK. If the policy was to be implemented in the entire province of Ontario, it could increase the total pool of organ donors by 225%.

As we have seen in this article, opt-out systems do have their drawbacks, but they help save lives and represent a big step forward in terms of patients health. While keeping in mind that mandated choice is the superior system, we should not let the perfect be the enemy of the good.