There is nothing inherently valuable about a dollar, a stone or a coin. Money is about the exchanges and the transactions that we have with each other and it has a value only because we have all decided it should. Money is not an objective. It is a collective story that we tell each other about value. It is merely a fictitious concept, regardless of whether it is incarnatted in a physical object or not… a concept that makes our economies run, our societies work, our clocks tick.

Yet, Edison once said that “time is really the only capital that any human being has”. Surely, he was not referring to time as a currency or a means of payment. However, another gentleman, a Welsh socialist and labor reformer in London named Robert Owen, did in the early 19th century. In fact, he founded the ‘National Equitable Labor Exchange’ that issued Labor Notes to be used in economic exchanges and the first time-based currency came thus into life. It did not last long. 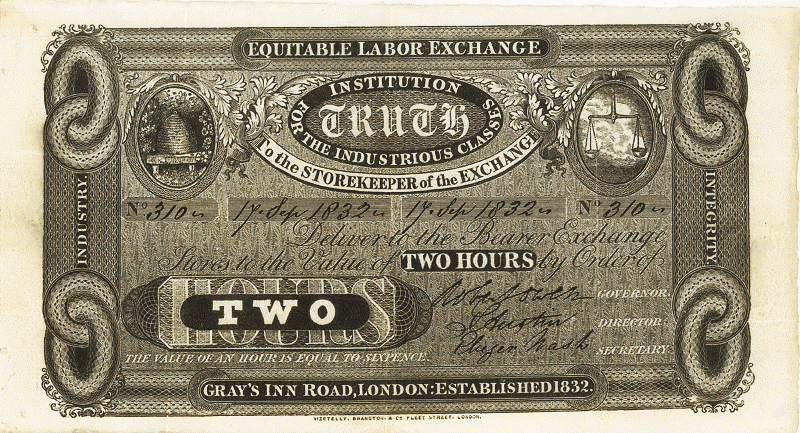 Today, the idea is more frequent than many of us would guess and the concept is concretized in the so-called TimeBanks, which are formed when people come together to use such alternative currency in the exchange of services and skills. The world’s first TimeBank was started in Japan by Teruko Mizushima in 1973 where participants could earn time-credits which they could spend at any time during their lives. The bank was based on the concept that each hour of time given as services to others could earn reciprocal hours of services for the giver at some stage in the future, particularly in old age when they might need it most. Unlike money, where some work is valued highly and other work is given little value, this concept valued everyone’s contributions, aka time, equally: an hour of service was always one time-credit regardless of the nature of the service performed (the so-called principle of ‘an hour for an hour’). Thus, one hour of gardening for an elderly person had the same value as one hour of legal work.

TimeBanks are frequently used as a community development tool on smaller but also larger scales and often aim to increase social and economic well-being. They include group and community projects like tutoring in schools, health and social care, civic engagement, and more in a commune or small city, and consequently form a different kind of local economy for certain activities. Their popularity is increasing enormously throughout the world since their uses are broad and they underline the fundamental equality between human beings (regardless of the fact that we currently value differently – in terms of money – different types of work). Examples vary from maximizing the use of assets and resources such as a spare meeting room to babysitting or other cares and services.

TimeBanks can therefore have a very positive impact on social justice and communities. They create an equality of access to certain services, remove barriers linked to race, class, economic strength, gender, or origins, and provide a platform for the cultivation of stronger connections, friendships and communities.

Food for thought: Could a time-based currency (still respecting the principle of ‘one hour, one time-credit’) also be used in the exchange of goods by ‘pricing’ these in time-credits?

This article is a brief compilation of the following sources:

Post-Capitalist Entrepreneurship: Startups for the 99% by Boyd Cohen, TimeBanks.