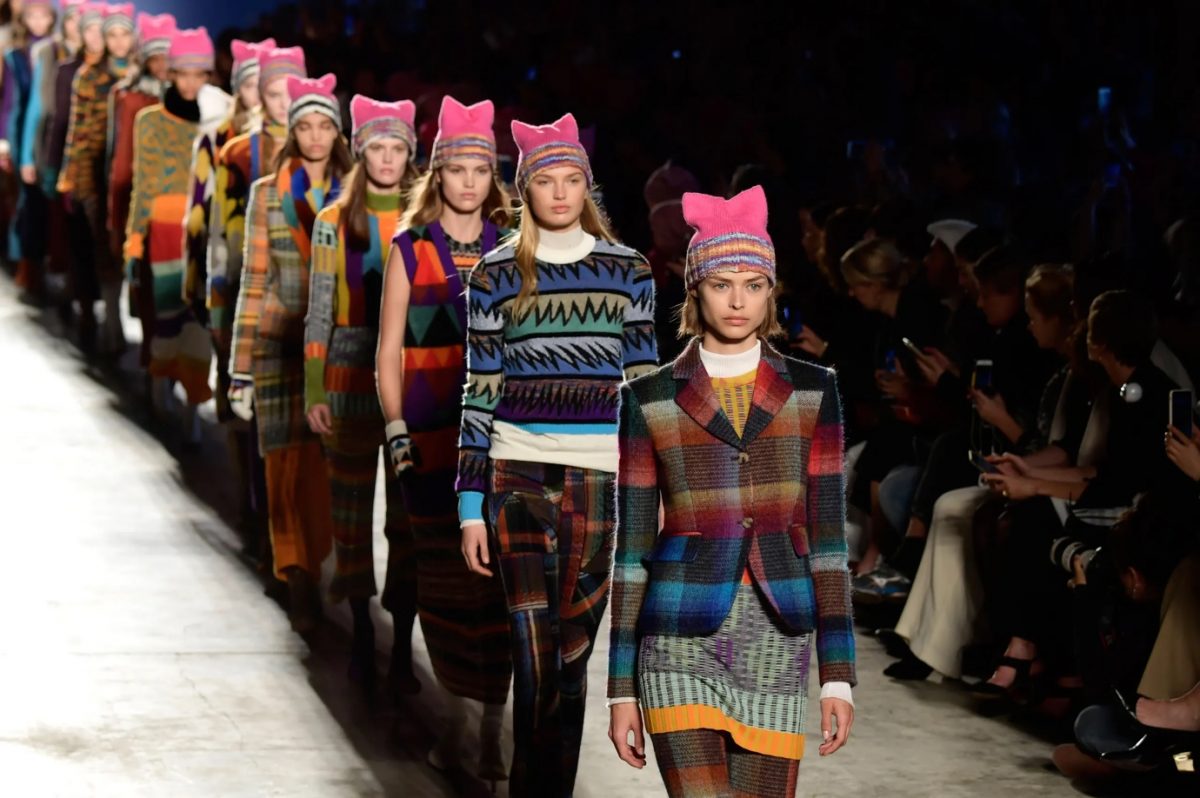 Fashion is a form of art, and the designer is the artist. Just like any artist, through their creations, designers transmit their ideas, beliefs, and messages.

Whether we are passionate about fashion or not, no one can deny the irreplaceable place it has in our lives. Putting clothes on is a part of our daily activity, and whether you take two hours to pick your outfits or two minutes doesn’t change the place fashion has engraved in our lives.

For centuries, fashion was used as a political statement. Even back in the middle ages, sumptuary laws prohibited commoners from dressing above their station. Today, clothes are less of a representation of social status but more of an expression of ourselves, our personality, and what we stand for. It’s the way we show the world who we are and who we want to be.

The most recent example to look at would be the United States’ first female vice-president, Kamala Harris. Back in November, when Kamala Harris stepped onto the stage in an all-white suit to deliver her remarks as a vice-president-elect, her choice of outfit was impossible to go unnoticed. At that moment, it wasn’t a fashion statement that was being made; it was a political one. 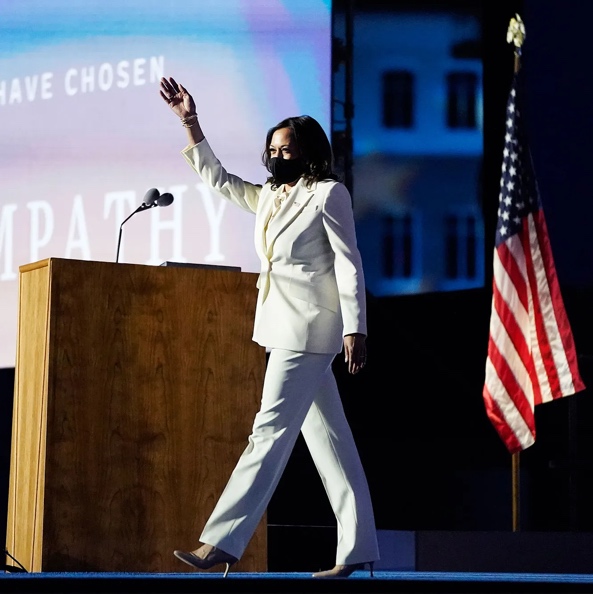 The choice of color in the white pantsuit, previously also worn by Hilary Clinton, Geraldine Ferraro, Shirley Chisholm, and Nancy Pelosi, symbolizes female solidarity. White plays a role as a symbolic reminder of how long women have been fighting for their rights.

Back in 2019, when Alexandria Ocasio-Cortez, the youngest Congresswoman in US history, was sworn into office, she chose to wear a white suit as well. She later wrote on Twitter, “I wore all-white today to honor the women who paved the path before me, and for all the women yet to come.”

The symbol of the color white dates all the way back to Britain’s Suffragette. Back at the beginning of the 20th century, Suffragists often opted towards wearing white to stand out while promoting their cause. The white was also a representation of ‘purity,’ and the affordable side of the white fabric meant that women of different backgrounds could participate in the marches.

Back in 2018, during the 75th annual Golden Globes, celebrities turned up wearing all-black outfits. Their black outfits represented their support for the Time’s Up movement, standing in solidarity with victims of sexual assault and harassment.

You might be thinking, why was the somber shade of black used to represent their solidarity? According to the Time’s Up Legal Defense Fund, nearly everyone owns something black. It’s not only serious but democratic. Alongside that, black is a powerful color that has layers of intense meanings while also conveying elegance.

For the past century, the color pink has been associated with the gendering of young girls. It is more than common to see pink balloons when a girl is born and blue balloons when a boy is born. However, before pink was strictly transformed into a marketing purpose color, back in the 18th century, in the West, pink was a color preferred for elite boys rather than girls.

Pink, which can sometimes be seen as girly and weak, is now a color used by many, including politicians, to show strength and a way to push against gender stereotyping. The use of the pink ribbons for breast cancer awareness back in 1992 is one of the earliest examples of this.

In 2016, a salmon-shaded pink color, which was given the name of “millennial pink,” went viral. Famous brands such as Acne Studios and Glossier used this shade of pink for their logo and packaging. These brands were all aimed at young women, representing a new kind of modern womanhood that was authentic, empowered, and outspoken. The “millennial pink” is a much more gender-neutral color compared to the brighter pink we are used to seeing on packages oriented towards younger girls. Looking at the historical context, during the birth of the “millennial pink,” the world was in the presence of the rise of fourth-wave feminism and Hilary Clinton’s presidential candidacy. 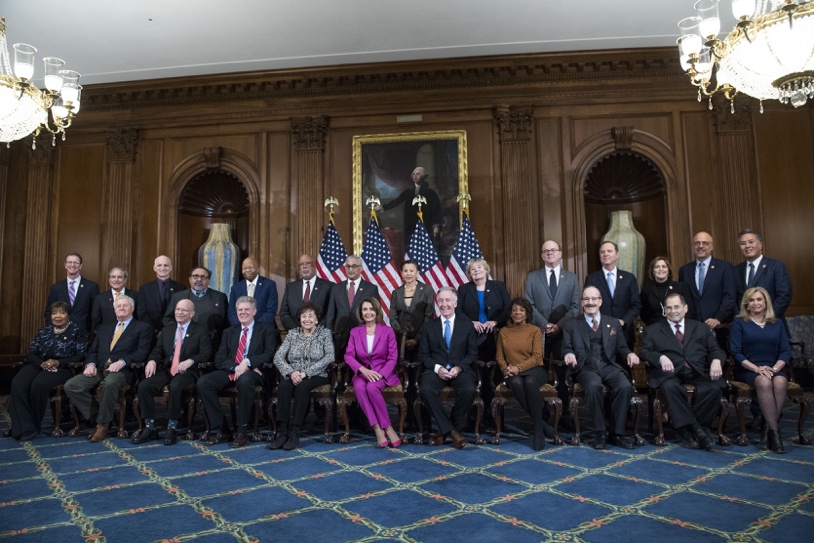 In 2020, social media witnessed yet another rise in the color pink, this time, it was called the “political pink.” As the US presidential elections were approaching, several celebrities started posting photos of themselves in pink suits. Andrew Burnstine, associate professor at Lynn University, explains, “to the millions of people who are demanding change in our political system, and to American democracy, the color pink is the new battle-cry.”

Pattern, just as much as color, is an essential part of fashion. When we think of florals, one very significant movement in history comes to mind: The Flower Power.

The flower power movement was all about a peaceful protest. During their demonstrations, the flower children would put flowers over the bayonets, and in the barrels of the guns the soldiers were holding.

The flower was the symbol of universal peace and love, which is why alongside giving flowers, they would also wear floral prints. Today, we refer to this type of clothing as ‘hippy clothing’.

Some of the biggest names in the fashion industry have shown their support for important causes with their designs and creations. They use their platform to attract attention to important subjects.

If we were to focus on the topic of feminism, some of the most iconic brands in the fashion world, such as Dior and Chanel, have created collections that permitted them to display a particular message.

Back in 2014, for Chanel’s spring 2015 collection, Karl Lagerfeld put on an iconic runway show during Paris Fashion Week.

For the finale of the show, all the models walked down the runway and staged a feminist protest as they carried banners in English and in French that read “Make fashion not war,” “Ladies first,” “History is her story,” “Je ne suis pas en solde,” “Oser sans poser,” etc.

However, these slogans weren’t only limited to the banners that were carried during the runway show; the Chanel spring 2015 collection contained handbags that had some of these slogans written on them. 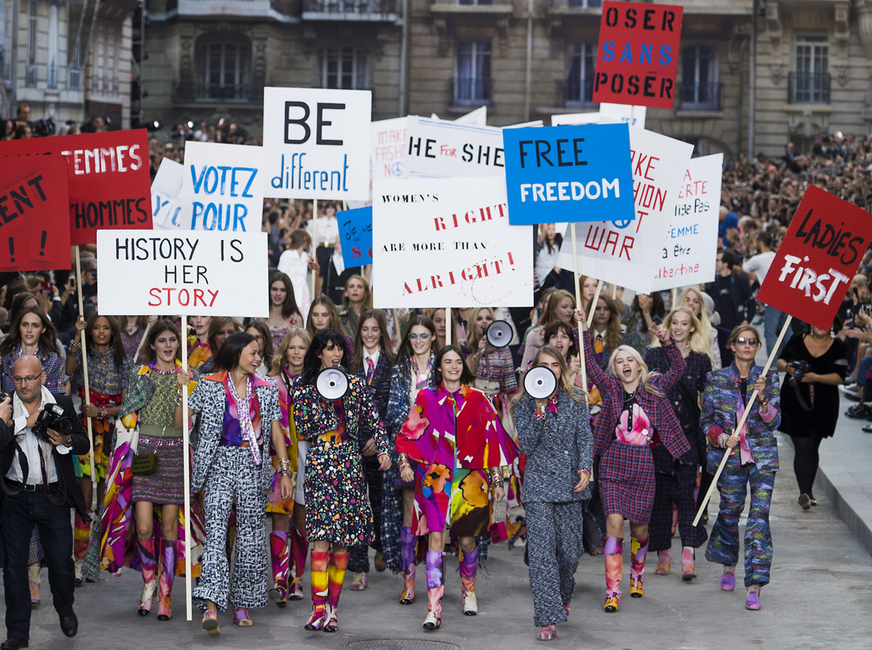 Back in 2016, Maria Grazia Chiuri became the first female artistic director at the unparalleled fashion house, Dior. Ever since her first collection that she designed for Dior, her goals have always been to change the way we look at women and fashion. Her first collection contained a t-shirt that is still on sale even in 2021, with the slogan “We should all be feminists.” This slogan refers to the Nigerian writer Chimamanda Ngozi Adichie’s famous essay that created a modern definition of 21st century feminism.

For their Fall 2020 show, Dior put on a feminist fashion runway show. The runway was illuminated with giant signs that read: “consent,” “when women strike the world stops,” “women’s love is unpaid labour,” “women are the moon that moves the tides,” etc. 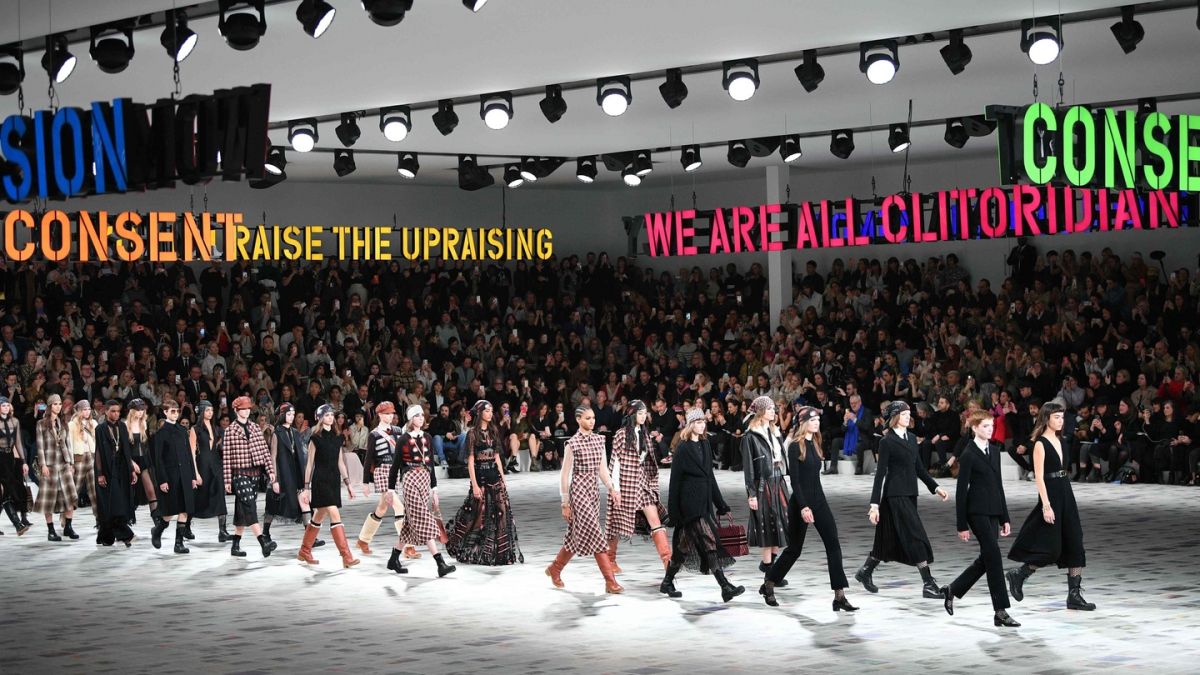 During the 2017 Milan Fashion Week, Missoni used the runway to express her political views. For the finale of the show, all the models walked down the runway in pink hats (as shown in the photo below) which are known as ‘pussyhats.’ This specific shape and color of the hat symbolizes female solidarity and was also a reference to the Women’s March that took place the same year where every participant in the protest marched wearing a ‘pussyhat.’

Missoni’s variation of the pussyhat featured the fashion house’s signature zig-zagging print, but the most significant element remained the color of the hat: pink. 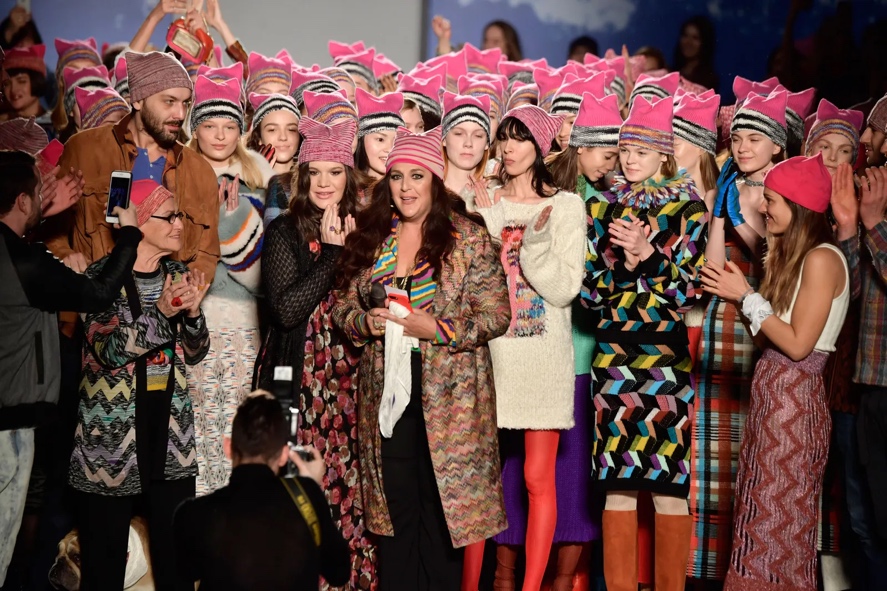 Wear the clothes, but don’t stop there

Politics today is all around us; it’s on our phones, it’s on the street, it’s on the news, and yes, it’s also in our clothes.

Politicians, as well as celebrities, have shown their support for several causes on and off social media. On social media, they show their commitment to the cause by posting a photo of themselves in either a slogan t-shirt or in an outfit in a specific color to match the cause. However, of course, wearing the clothes isn’t enough. At the end of the day, what counts is the genuine engagement we show towards the cause and what we do to help it.